In an effort to speed up play on the multi-million dollar US PGA Tour a new rule will see fewer players making the cut next season.

The Tour has agreed to align itself with both the European Tour and the US secondary tour, the Korn Ferry Tour, by changing the cut mark to the top 65 and ties instead of the previous rule of top 70 and ties. 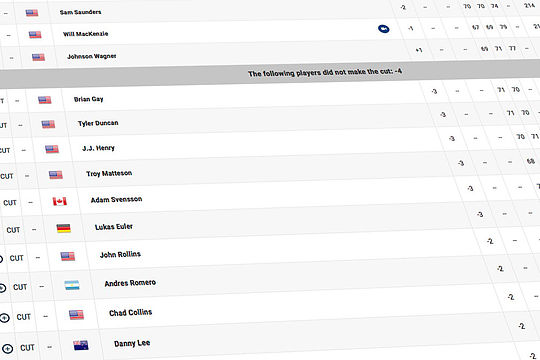 That old rule saw as many as 78 and occasionally even more, making the cut.

Along with the new cut policy, beginning in the 2019-20 season, the board will also eliminate the secondary cut which required a 54-hole field reduction if 78 or more players advanced to the weekend.

The secondary cut began in 2008 in response to pace-of-play issues over the final two rounds when more than 78 players advanced, but the policy proved to be problematic at some events likes The Players Championship and during the playoffs.

By reducing the cut to 65 and ties, the circuit largely reduces the number of times 78 or more players advance to the weekend.

The board deferred action on an accompanying proposal that adjusted the purse breakdown to align with the new cut policy.

A proposal to award 20 per cent of the total purse (an increase from the current 18-per cent model) to the winner was presented to the board.

The player advisory council will review the proposal at its next meeting.

The board also approved a regulation reducing the field size at opposite-field events from 132 players to 120 beginning next season with a stipulation that the fields be expanded to accommodate all of the players from the Korn Ferry Tour category if needed.