PGA Tour finally decides to stand up to obnoxious fans

PGA Tour Commissioner Jay Monahan believes the PGA Tour has the best fans in the world but in reality, the Tour boasts the loudest, most obnoxious, vile and odious fans on the planet.

You only had to sit through last week’s thrilling final round at the BMW Championship and have it spoiled by beer-fuelled imbeciles to realise the PGA Tour has a lot of work to do. 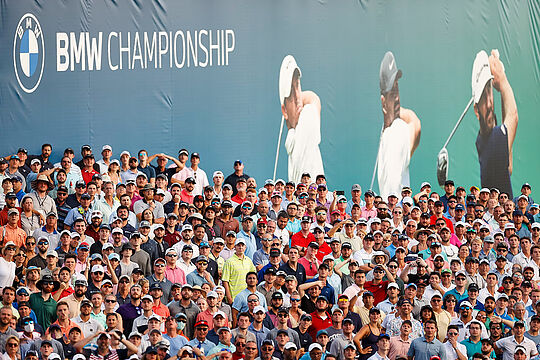 We’re not for a moment saying all PGA Tour fans are unruly as they have cousins occasionally raising their heads at European Tour events but the PGA easily boasts the worst of the worst when it comes to fan behaviour.

We’ve all missed attending big golf tournaments but now that fans are being allowed to return, it’s like open season with shouts of ‘In the hole’, ‘You da the man’, ‘get in the bunker’ and that gem ‘mashed potatoes’.

Monahan, and in his annual State of the PGA address ahead of this week’s Tour Championship, singled out spectator behaviour. He’s called on PGA Tour spectators to ‘contribute to a welcoming and safe environment by refraining from and reporting any unsafe, disruptive, or harassing behaviour’.

You’ll never hear such words from those running the European Tour, the Asian Tour, the Japan Tour, the Australasian Tour or for that matter any other Tour outside of the U.S.

Sadly, the States is all alone when it comes to spectator unpleasantness.

We saw for many years how Colin Montgomerie was treated. More recently we saw at the 2016 Ryder Cup, and even though again it was only a small percentage, the treatment of Danny Willett was inexcusable with fans screaming profanities at his parents and his wife because they were upset by tongue-in-cheek pieces written by Willett’s brother.

There was also an ugly incident that week where Rory McIlroy had a fan ejected over an obscenity that I’m not about to repeat here.

More recently during last Sunday’s BMW Championship we had DeChambeau being taunted by fans screaming out ‘Brooksie’ in reference to the spat between the pair of US Open winners.

DeChambeau was clearly becoming distracted by it to the extent that after losing out to Patrick Cantlay he left the 18th green only for a fan to remark: “Great job Brooksie!” DeChambeau immediately spun around in a rage and began briefly walking in his direction. “You know what? Get the f*** out!” DeChambeau yelled with rage in his eyes.

Monahan is now declaring enough is enough and saying that those bad eggs among ‘the best golf fans’ in the world need to be weeded out.

“I think we can all agree that we have seen issues as of late across the sports landscape where that pent up demand plays out in an ugly way” said Monahan.

“Golf is not immune from unfortunate and disruptive behaviour, although I would say that we do have the very best fans in the world. This is about just a few bad actors. And for the record, this isn’t about any one particular player or one particular incident, but in some situations it’s apparent that we have gotten away from the very civility and respect that are hallmarks to our great game.”

“We began working on an updated fan code of conduct program in 2020, but put it aside last summer when we were playing without spectators and needed our focus to be on implementing the complicated yet necessary health and safety plan.”

“Once we began returning to normal capacity, we made it the highest of priorities to reinforce an environment at PGA Tour events that allows for everyone to enjoy in a safe environment, and that is spectators, players, volunteers, literally everybody”.

Monahan pointed out that attending any PGA Tour comes with the obligation to carry yourself so that you adhere to a code of conduct.

“By coming to a PGA Tour event, you’re expected to contribute to a welcoming and safe environment by refraining from and reporting any unsafe, disruptive, or harassing behaviour. Comments or gestures that undermine the inclusive and welcoming nature of the game will not be tolerated, nor will any harassment of players, caddies, volunteers, officials, staff, or other spectators”.

Monahan stressed that fans who breach our code of conduct will be subject to expulsion from the tournament and loss of their credential or ticket.

“I would ask our fans, again, the very best fans in the world, to take a moment and think about what it means to be a golf fan and to enjoy a PGA Tour tournament”, Monahan added.

“We’re going to be leaders in this space. We’re going to show everyone how easy it is to enjoy yourself at an event while also respecting the athletes in the field of play and the fans around you, many of whom are families with young kids who have a chance to be lifetime fans of the game themselves. Quite honestly, we should expect nothing less from each other, whether we’re at a golf tournament or elsewhere in life”.

Monahan is expecting a lot as this vile behaviour has spread like a virus at Tour stops from one end of the US to another. It’s disgusting, it’s disgraceful, it’s vile and it’s loathsome and as we saw last week in Baltimore, it’s also becoming hateful.