It’s fair to say the United States Golf Association lost a few friends amongst the pro ranks with the way they ran the US Open at Shinnecock earlier this month.

That probably won’t bother them too much because some pros suggest they don’t take any notice of anyone else’s opinion anyway. 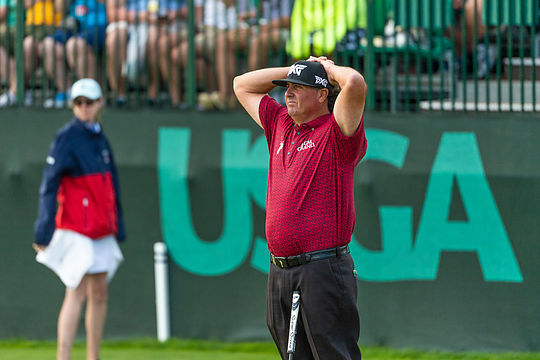 Pat Perez was amongst a group of Tour players to vent their frustration at USGA (Credit: USGA)

High-profile players like James Hahn, Pat Perez and even Justin Thomas have been quite vocal in their criticism of the USGA and the way they set up the course for their biggest championship of the year.

“They don’t take opinions or comments from anybody,” said Perez. “They don’t bring the PGA Tour in, Augusta, the R & A or the European Tour.

“Unfortunately this is the only tournament every year [where] this seems to be a question.”

USPGA champion Justin Thomas was also asked his opinion of the US Open:

“It’s too big a tournament to keep having issues,” said Thomas.

“Instead, all that’s being talked about is the set-up.”

Yet the worst criticism came from a pro who didn’t even tee it up there this year, James Hahn.

Hahn has only played in one US Open in his career, at Oakmont in 2016.

Still the 36-year-old cited an example from his lone appearance in the tournament when, before teeing off in the second round after inclement weather had pushed its completion to Saturday, he said he asked an official what the Stimpmeter reading was for the greens.

“His response was the greens are really fast but we slowed them down for you guys,” said Hahn.

“He didn’t know the Stimp. None of them knew.”

In between the second and third rounds, Hahn said he continued to seek out an answer and was told the greens were double cut or double rolled. Asking which one it was, he said, no one knew.

“To me, that’s amateur hour,” said Hahn, who is now a member of the PGA Tour’s Player Advisory Council.

“For how well other tournaments are run, the U.S. Open has fallen to the worst major that we have.”