The PGA TOUR has announced the full schedule for the 2013-2014 season, which features 45 FedExCup tournaments and for the first time, a wraparound schedule bridging two calendar years. 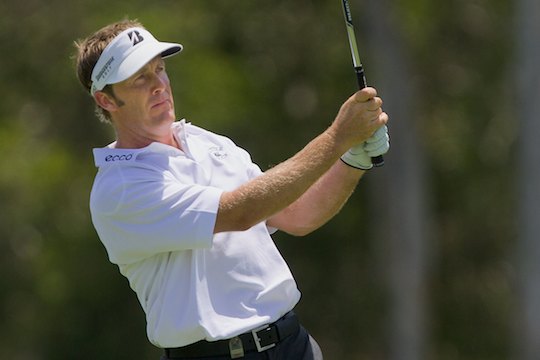 Stuart Appleby has already confirmed he won’t be returning to Australia due to the conflicting schedules of the new PGA Tour season (Credit: Anthony Powter)

“We have an exceptionally strong schedule as we transition to the new season structure,” said Andy Pazder, Chief of Operations for the PGA TOUR. “The season has a solid and interesting start with three domestic and three international tournaments, providing players with a great opportunity to get a jump in the FedExCup standings.”

“The schedule then resumes in January with the traditional swing through Hawaii before moving to the West Coast. We are very pleased with the flow and stability of the new schedule.”

While the PGA Tour may be pleased, the new schedule will directly clash with several of Australia’s major events through October and November.

The chance to get off to a flying start on the PGA Tour for many of our Australian players, especially those without multi-year exemption status on Tour, may see them opt out of returning home at all this summer or at least until the final event in Mexico concludes.

Stuart Appleby has already announced his intentions not to return to Australia for the summer for the first time in 15 years and the schedule may result in others following suit.

The schedule resumes in January with the traditional two-week swing through Hawaii – the Hyundai Tournament of Champions in Maui, which concludes on Monday January 6, and the Sony Open in Hawaii in Honolulu before starting a six-week stretch on the West Coast with the Humana Challenge.

The TOUR remains in the Southeast and returns to Texas over the next seven weeks, beginning with the Masters (April 10-13) and ending with the Crowne Plaza Invitational.

Another seven-week block continues through the Midwest and Northeast, starting with the Memorial Tournament and culminating with the John Deere Classic, a stretch that includes the US Open at Pinehurst No. 2 (June 12-15).