The PGA Tour has repeatedly told its membership they would face the consequences of playing the breakaway LIV Golf Series and today they made good on that threat.

Just minutes after the inaugural LIV event teed off in London, Commissioner Jay Monahan announced that the 17 current PGA Tour players, and any future participants, taking part in LIV Golf tournaments would be suspended indefinitely. 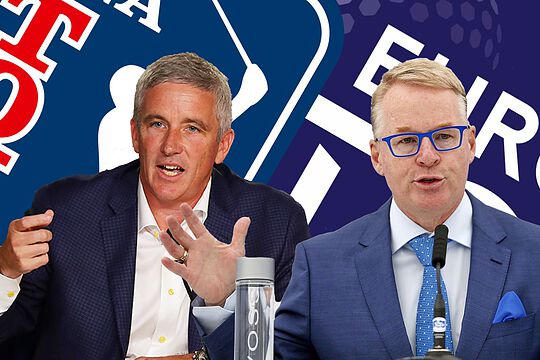 Jay Monahan has already made his move. Will the DP World Tour’s Keith Pelley be next?

“These players have made their choice for their own financial-based reasons. But they can’t demand the same PGA Tour membership benefits, considerations, opportunities and platform as you. That expectation disrespects you, our fans and our partners.”

“Today’s announcement by the PGA Tour is vindictive and it deepens the divide between the Tour and its members,” wrote Norman.

“It’s troubling that the Tour, an organisation dedicated to creating opportunities for golfers to play the game, is the entity blocking golfers from playing. This certainly is not the last word on this topic.”

“The era of free agency is beginning as we are proud to have a full field of players joining us in London, and beyond.”

And with Bryson DeChambeau and Patrick Reed rumoured to play the second LIV Golf event in Portland, Oregon at the end of this month, the list of suspended players looks set to grow.

It remains to be seen how major tournaments will deal with the suspended players given they are not under the PGA Tour umbrella. The USGA has already indicated they will allow LIV Golf players to compete in next week’s US Open but how will Augusta National or the R&A deal with the situation if more players defect this year?

Also on the cards is the DP World Tour handing out suspension to its players. However, the ex-European Tour could easily be branded as hypocritical if it chooses that path given the UAE-founded DP World now owns naming rights to its own tour. Prior to its renaming, the Tour was also partial to taking large sums of money from events in China and the Middle East in the name of worldwide expansion.

Either way, the world of golf is in for a tumultuous year.