PGA Trainee Ben Stowe from Royal Sydney Golf Club will finish the third year of his PGA Traineeship on a high note after winning the $60,000 National Futures Championship at Ballarat Golf Club.

After setting the course record at 7-under 65 in round three, Stowe’s final round of even par was enough to see him record a five-shot victory finishing at 9-under the card. 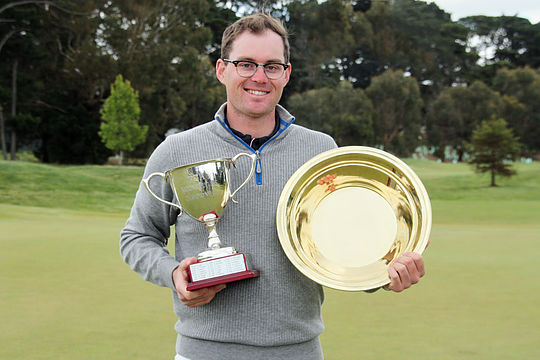 “It feels unbelievable, it really does, all the hard work I’ve been putting in has come to fruition,” said Stowe, who will finish the final year of his PGA Traineeship as a winner of the world’s richest Trainee tournament.

“I played really well and did what I needed to do. Frazer (Droop) and the boys kind of battled a little bit on the front-9, Frazer made a really strong charge at me at the end so I had to keep my wits about me, but I’m ecstatic I got it done.”

Stowe began the final round with a four-shot buffer which admittedly played on the 24-year-old’s mind.

After nervously teeing up on the 1st, he was quickly able to settle into stride around the Ballarat Golf Club course.

“It was in the back of my mind and last night I couldn’t stop thinking about it. I was probably the most nervous I’ve ever been on a golf course on the first tee this morning, but it didn’t really come into play today.”

“I can’t wait to get back to Royal Sydney, I was on the phone to my PGA Pro coach Michael Smyth last night and he said just to keep doing my thing and it should be good enough and it was.”

Following the completion of his PGA Traineeship, Stowe is looking to ply his trade on the international scene with a tilt at the Asian Tour Qualifying School as well as his home Tour, the ISPS HANDA PGA Tour of Australasia.

“Hopefully I play well enough to get status somewhere and just keep progressing and keep the hard work going.”

Along with his Futures title, Stowe also receives automatic exemption in to the Australian PGA Championship at RACV Royal Pines Resort.

Finishing in second place was 2017 champion Frazer Droop who shot 1-over 73 to finish at 4-under the card, Cooper Eccleston finished third at 3-under the card.