Phil Mickelson has taken out the season-ending Charles Schwab Cup Championship on the PGA Tour Champions tour on Sunday with birdies on three of the last four holes to finish at 19-under and a shot ahead of New Zealand’s Steven Alker.

Mickelson entered the final round three shots behind Jim Furyk and came out blazing with a birdie on the first and seventh en route to a closing 6-under-par 65. Furyk closed with a 71 to finish in a share of 5th position with Darren Clarke and David Toms sharing third position. 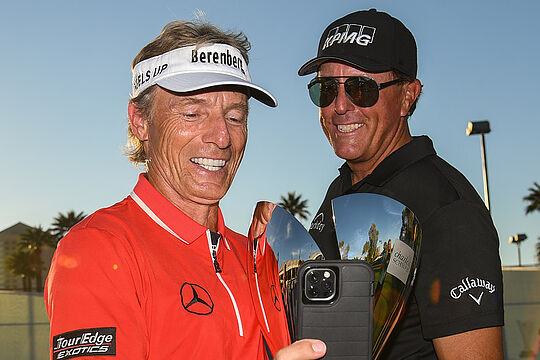 “It’s been fun for me to play out here and see so many guys that I grew up and spent decades with lifelong friends,” said Mickelson. “Then to play well and have some success is very meaningful.”

Few players in history, if any, have dominated the PGA Tour Champions tour like Mickelson so far in his career. He’s basically been unbeatable throughout his six starts

Mickelson joins Jack Nicklaus as the only player to win four of his first six PGA Tour Champions starts and what a year it has been for the 51-year-old after also winning the PGA Championship in May.

Rod Pampling was the only Australian to make the season ender and finished in a share of 27th position at 8-under-par.

Bernhard Langer, 64, held on to win his sixth PGA Tour Champions season points title. Despite suffering from a bad back, which was so severe he considered withdrawing before the tournament began, Langer fired a 63 on Saturday to beat his age by a stroke.

The German fired two par-5 eagles and four birdies in an age-defying bogey-free round.

Langer has had an incredible season. He won twice and collected 24 top-10 finishes in 39 starts. He continues to post results in a stellar career which to date includes being a two-time Masters champion, 42-time European Tour winner, 42-time Champions Tour winner and six-time Schwab Cup winner.