University of Georgia’s Trent Phillips has won the 68th Sunnehanna Amateur Tournament for Champions closing with a total 9-under to take home the coveted green jacket.

The South Carolina native carded a final round 2-under 68 leaving him a shot in front of Washington’s Ian Siebers, who did his best to spoil the party with a superb 65 around the challenging Sunnehanna Country Club. 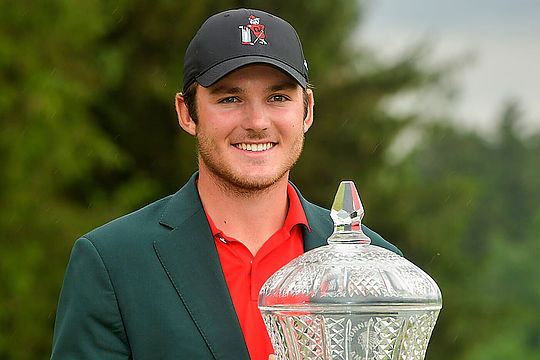 “Believe it or not, I didn’t miss a fairway today,” Phillips told the Tribune-Democrat. “I was 2-over through 8 and I literally didn’t miss a shot. It goes to show you this golf course has some teeth and it showed it today, especially with the soft greens.”

Karl Vilips topped the small Australian field in Pennsylvania this week, sharing a four-way tie for 7th after earlier dominating the field with opening rounds of 68 and 65 to take a two-shot lead into Friday’s third round.

Rounds of 71 and 73 saw Vilips, who was born in Indonesia but makes his home in Western Australia, unable to take advantage of his opening heroics.

Lachlan Barker was next best in a share of 19th and did well to scramble back from back-to-back opening rounds of 74.