One of the forgotten men of Australian professional golf, Mark Hensby, nearly pulled off the unlikely at the PGA Tour’s Barbasol Championship in Alabama but in the end, it was 36-year old American Scott Piercy, who strode away with a three-stroke victory over compatriot Will Wilcox.

Piercy’s third PGA Tour victory was a fitting comeback from struggles following surgery in 2014 to repair a torn flexor digitorum superficialis in his right arm. 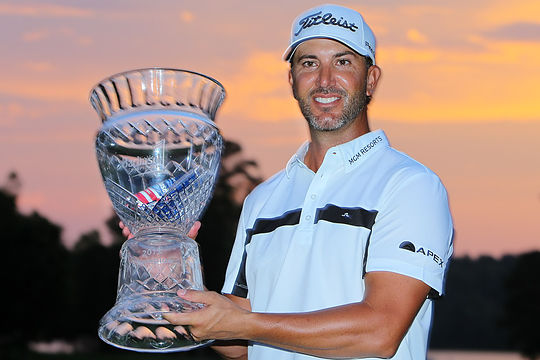 “I just knew it was a matter of time coming back and it’s been a long road, but my whole goal after having surgery was to come back better,” Piercy said.

“The way I played today compared to my last two victories was a lot better. I mean, I flushed it, I struck the ball so well, and so I would say I’m kind of where we imagined I would be.”

Piercy entered the back nine with a four-stroke lead and maintained that margin to close with a second-successive 6-under 65 for a 19-under total.

Alabama native Wilcox provided some excitement for the gallery by draining an improbable 60-foot putt on the 18th green. While the birdie was not good enough to catch Piercy, he all but secured his 2016 Tour card in the process.

“You always dream about doing something like that in front of them (family and friends),” Wilcox said. “I mean, I know I didn’t win or anything like that, but finishing solo second is still a big deal to me. I don’t care if it isn’t to anyone else.”

Hensby finished in a tie for sixth place, his first top-10 finish since the 2008 Byron Nelson Championship.

The former President Cup representative has been away from full time action for more than three years after shoulder surgeries stemming from injuries he received in car accident in 2006.

“To be honest, today was really a letdown,” he said. “I played so good today. The front nine, I hit it close but that was the worst putting. I putted well, but I read the greens terribly.”

“But it was fun to be back in there and play well. That was probably the most positive thing I took out of this week is not so much finishing in the top 10, but I played well under pressure I haven’t felt in a long time. I feel like I belong. I can still play out here.”

University of Alabama junior Robby Shelton shot a 4-under 67 to finish tied for third in his PGA TOUR event. Shelton is the 18th amateur to finish inside the top three in a Tour event since 1940 and the first since Phil Mickelson won the Northern Telecom Open in 1991.

Australia’s only other player in the field, Aaron Baddeley, also made a pleasing return to form in Alabama to record his best result of the season. Baddeley shot a final round 67 to finish tied for 10th at 12-under.