Historic-winning Belgium Thomas Pieters played the real diplomat declaring ‘No comment!” when asked if he thought he would earn a European Ryder Cup ‘wildcard’ pick following his dramatic Made in Denmark success.

Pieters became the first Belgium-born golfer ever to win three European Tour titles when he birdied the closing three holes and capture the Danish event with a final round 65 for a one shot victory. 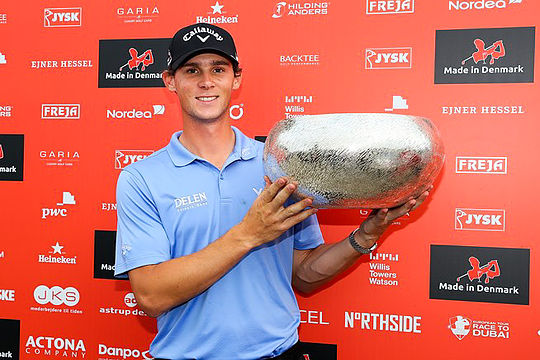 “It was really cool the way I finished and very pleased how I closed this out,” said Pieters.

“I was pretty relaxed down the last few holes as opposed to last where I struggled a bit in the middle of my final round so I was having some flashbacks to last week but I am just happy to win the tournament.”

Of course, Pieters was runner-up a week ago in the defence of his Czech Masters title.

The 24-year ended his round about an hour after Scotland’s Russel Knox posted a closing 70 for a four over par tally in the Barclays Championship at Bethpage Park on New York’s Long Island.

However while many observers will say Knox has done enough to earn one of three Darren Clarke picks, Pieters has thrown a real spanner in Clarke’s plans with his victory in Denmark.

But then the Antwerp-born Pieters was not about to let his emotions get carried away with him when asked of his Hazeltine chances.

“I have no comment to that,” when asked if he thought he’d done enough for a ‘wildcard’ pick.

“Everybody will find out on Tuesday.”

And when it was suggested he may have handed Clarke a big headache following his victory, and also after Clarke played the opening two rounds in his company, Pieters responded: “I would say so, yes!”

Richard Green was the only Australian to make the cut this week but finished a distant 50th.