Belgium’s Thomas Pieters is managed by the same company that looks after the business affairs of Tiger Woods and now last fortnight’s Czech Masters winner is following in the same vein in capturing the KLM Open at Zandvoort.

Pieters made it two wins from two starts on the Race To Dubai tour when he was virtually gifted victory when England’s Lee Slattery missed a four foot par putt at the last to end at 18-under par one one adrift of Pieters. 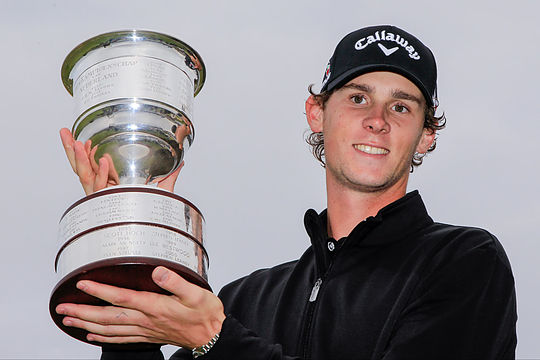 Slattery, winner of last week’s M2M Russian Open, ended in a share of second place alongside Eduardo de la Riva after the Spaniard mixed eight birdies with a bogey to finish on 18 under, with Fabrizio Zanotti another stroke back.

The 23-year old Pieters, who along with Woods, Justin Rose, Matt Kuchar and fellow Belgium Nicolas Colsaerts is managed by Excel Sports Management, started his final round at Kennemer Golf and Country Club two strokes behind overnight leaders Rafael Cabrera-Bello and Slattery, but fired four birdies on his front nine to move into contention.

After carding another birdie at the tenth, Pieters then missed his ten foot par putt at the 11th to drop back to 18 under before a birdie at the 13th and five further pars saw him add a closing 65 to his previous scores of 68, 66 and 62.

He said: “I’m really, really happy. I felt like I played better in the Czech Republic, but my short game was great this week and saved me many times.”

“I rolled in a couple of good ones early in the round and made a really good par save on the ninth which kept the round going,” said Pieters

“I had chances coming in and I felt like I needed to make a couple more. I feel bad for Lee as he played great.”

“It wasn’t comfortable watching him play the last couple of holes. I was wishing I’d made one more birdie. I’m really happy overall with the week and how I played and it’s nice going forward from here.”

Slattery, the winner of last week’s M2M Russian Open, made a strong start to his fourth round, notching a birdie at the second before carding seven straight pars – including a clutch ten foot putt at the ninth – to reach the turn in 35.

The Englishman made further gains at the 12th and 14th to move to 19 under par before his untimely bogey at the last.

De la Riva reached the turn in 34 on Sunday after carding three birdies and a bogey in his front nine.

The 33 year old made a stunning start to his back nine, picking up three shots in a row at the tenth, 11th and 12th holes before making further gains at the 14th and 17th to post a closing 63.

Eddie Pepperell and Morten Ørum Madsen finished in a tie for fifth on 16 under par, while Cabrera-Bello was among the group one further back on 15 under.

Meanwhile, American legend Tom Watson posted a third straight 68 on Sunday to finish the week on seven under par.

Despite an opening round of 61 and a third round ace to earn himself a year’s worth of beer, Australia’s Wade Ormsby had to settle for equal 10th place at 14-under par. Ormsby had his chances but was outgunned by some very low scores across the weekend.

WA’s Jason Scrivener was another two strokes back at 12-under (T18) to collect his fourth Top 20 placing in the last month.