Belgian Thomas Pieters finished with a 68 to win his fifth European Tour title at the 2021 Portugal Masters being played at Dom Pedro Victoria Golf Course.

Pieters won the title by a two stroke margin over France’s Matthieu Pavon and Danish pair Lucas Bjerregaard and Nicolai Højgaard, who finished with rounds of 66 and 64 respectively. Pieters and Pavon began the final round with a share of the lead. 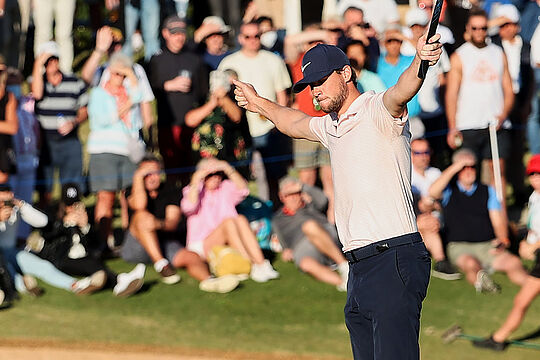 It was Pieters’ first win since claiming the 2019 Czech Masters and the 29-year-old was rightfully ecstatic.

“It feels amazing,” said Pieters. “It felt like a long time between victories but [caddie] Adam Marrow and I worked so hard and it felt like a deserved one.”

“I was struggling a bit with my swing, wasn’t really trusting it the way I did the first three days. I was busy with that in my mind and not really the scores.”

“I had a peek at some of the boards and saw we were up there maybe leading by one. It ping-ponged back and forth so I was happy to come out with a two-shot lead.”

Min Woo Lee finished the best of the Australians in a share of 8th position at 11-under to record another solid finish on the European Tour and to give him solid momentum heading into the championship final.

The Portugal Masters was the final tournament in Europe before the tour heads to Dubai to close out the season with the Dubai Championship and the $9,000,000 DP World Tour Championship.