The 36-year-old Pike was pushed until the very end by the young New Zealander, who had earlier placed one hand on the trophy at the final hole before missing a one metre putt and finishing on eight-under and three shots clear of the mixed-gender field. 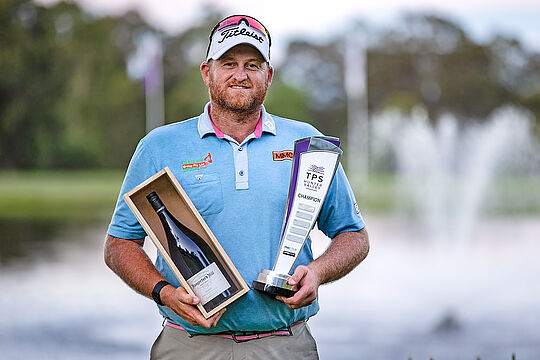 Pike, playing in the group behind, seized the moment with his par putt to force the pair back to the 18th tee for a sudden death playoff.

Both players failed to find the fairway on the first playoff hole but did enough to force a second hole where another pair of pars pushed the playoff to a third hole. Following a superb approach shot, Pike was able to seperate the two players, sinking a two feet putt for victory in the rain-shortened 54-hole event.

“I didn’t feel like I was doing much wrong to be honest”, said Pike, who last won a tournament at the 2020 NT PGA Championship.

“This golf course doesn’t give its shots up easy so I knew someone in front of me might be playing well but they’re not going to be seven or eight-under through 10 holes.”

“I couldn’t believe she was four-under through nine. I don’t know what golf course she was playing. She’s obviously playing like a gun at the moment.”

Despite her loss, Kibori has enjoyed an incredible summer finishing 11th at the TPS Sydney, 4th behind winner Hannah Green at TPS Murray River, 9th at TPS Victoria and outright 6th at the Women’s Vic Open.

“It was amazing to see Hannah win at Cobram a few weeks ago,” said Kobori of Green’s historic win at the TPS Murray River.

“It’s so good to see quite a few of us girls doing quite well in the TPS events the past couple of months. It’s definitely good motivation for all of us.”

Her career stats at Pepperdine University, where she spent from 2016 to 2020 studying in the US, show a level of consistency that will pay off well into the future. The pint-sized Japanese-born star finished inside the top-10 on 13 occasions from 38 events and 17 times inside the top-20.

Lawry Flynn, veteran Brad Kennedy, Ben Wharton and Cassie Porter shared third place on 5-under with Louis Dobbelaar another shot back in outright 7th on 4-under.

Next up on the Australasian PGA Tour calendar is the $400,000 NSW Open at Concord Golf Club.