The first event of the eagerly awaited Jeep Pro-Am Tour got off to hot and cold start at the magnificent Moonah Links Resort. 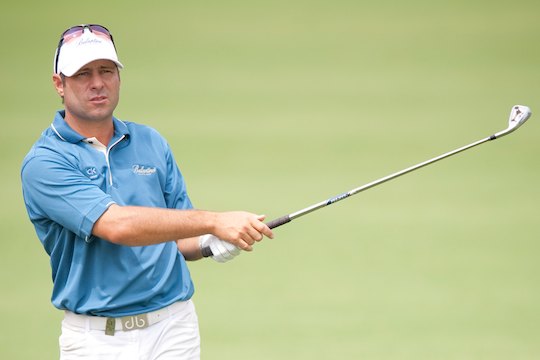 Although cold, the conditions for scoring were ideal with gentle winds and the course set up in a friendly manner.

Just 11 players managed to break 70 with Terry Pilkadaris firing the best round of the day – a six under par 66 – that included seven birdies and a lone bogey on the tough par 3 10th.

“I started my round fairly solidly with not a lot happening and was one under after eight holes before a great run of four birdies in five holes really got things going,” said Pilkadaris.

“The golf course played nicely and we probably got lucky with the weather which isn’t looking too great for the next three days.”

“With that in mind it was great to take advantage of the conditions today.”

Pilkadaris will have plenty of quality players breathing down his neck over the next three days with Henry Epstein and Marcus Both just one shot behind.

A further shot back again is New Zealand’s Mahal Pearce, Andrew Kelly, Ashley Hall and local Ben Wharton, who all shot four under the card.

With the first round being played on the Legends course, the second round will be played over the longer Open course.

The Open course has tested the best in Australian golf in previous years when hosting the Australian Open and Moonah Classic and will sure to be a challenge in what is expected to be tough conditions with showers and moderate to strong winds forecast.