Shelton, 26, fired a 6-under 65 to surge past Taylor, one of three 54-hole co-leaders, and finished at 17-under at the Club at Indian Creek in Nebraska. It was his fourth Korn Ferry career title and second in 2022. 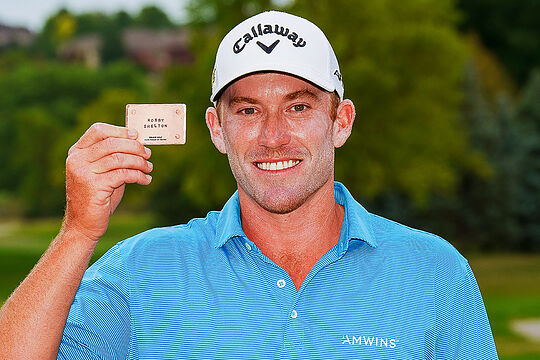 What was of significance was the tournament would determine PGA Tour cards as it began with the top-15 players in the standings having already secured their cards, leaving nine up for the taking on the weekend after England Harry Hall also secured his card by making the cut.

Aussie Harrison Endycott secured his PGA Tour card privileges finishing 21st in the rankings and inside the desired top-25. The Avondale GC member came into the week at 19th but it wasn’t until completing his final round for a share of 55th that his top-25 finish was officially confirmed.

A five-stroke victory at the Huntsville Championship in May for Endycott gave him the platform to aim for the PGA Tour, as well as adding a 5th place result at the Utah Championship and a 9th place finish at The Ascendant. Endycott finished with US$225,083 in season earnings with a scoring average of 69.68.

“You know you work so hard and it’s a grind. You work so hard not only weeks, but years and years,” said an emotional Endycott in the presence of his Dad.

“Coming to the end of the season and you know it’s a very small percentage of guys that get to that point, the pinnacle of golf where they are trying to get to. It’s just brutal…”

The tournament also produced the battle for the top-75, who get full Korn Ferry Tour status next year and a place in the Korn Ferry Tour Finals, where 25 more PGA Tour cards are available in a three-event series in which PGA Tour players who finished 126-200 in the FedEx Cup eligibility standings also compete.

As for the other Australians no other player made the weekend with Curtis Luck firing 69-73 to finish at 3 over-par and Rhein Gibson at 6-over-par along with Ryan Ruffels. Luck is currently ranked 96th in the standings with Ruffels falling to 141st. Gibson also fell to 150th in the rankings outside the desired top-75.