American James Piot dug deep to rally from a three-hole deficit with three late birdies to win five holes over the final eight holes on Sunday to capture a 2&1 win at the US Amateur Championship at Oakmont Country Club.

Piot defeated fellow American Austin Greaser, to gain exemptions into the US Open and The Open and a likely invitation to the Masters. 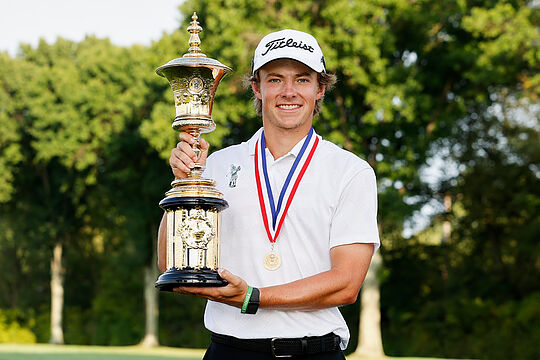 “It’s the greatest feeling in the world,” said an elated Piot. “I mean, as an amateur it’s the best thing you can do. After making that putt on 17, I was just like, ‘Oh, my God. I might’ve done it’. It feels phenomenal, shows the hard work I’ve done is paying off.”

Piot, 22, was ranked 86th under the WAGR and was playing in his second US Amateur. Currently completing his senior year with a major in finance at Michigan State University, where in 2021 he became the first MSU individual golfer to reach the NCAA championship since 2002.

Piot certainly used his experience to keep control of his nerves over the closing stages of Sunday’s final to grab the victory.

“I just tried to stay confident in myself. I wanted to play the back nine in 4 under and I ended up playing it in 3 under. That stretch, I have gained one or two holes every time I played, so that’s a big momentum swing, especially heading into the closing holes. That made a world of difference today.”

For Greaser he also receives exemptions into the next US Open and a likely invitation to the 2022 Masters.

The 20-year-old was ranked 82nd in WAGR and playing in his third US Amateur and entered the match play as the No.24 seed. He was seeking to become the first golfer from the University of North Carolina to win the US Amateur since Harvie Ward.

“I felt like he didn’t make a lot of birdies, but he just didn’t do a lot wrong,” said Greaser. “He just kind of plotted his way around the golf course, got up and down when he needed to, made a couple putts, a lot of pars, and unfortunately, I was probably making more bogeys today than I had all week.”

Three Australians competed in this US Amateur with Louis Dobbelaar topping the Aussies after making the round of 64 before losing to American Ross Steelman, 2-up.

The 2021 final represented the eighth final in the last 12 years with two players from the United States. It also marked the third year in a row with an American champion.

It’s just the second time since 2003 that three straight winners were Americans. James Piot joined Andy Ogletree and Tyler Strafaci, both of Georgia Tech, as the most recent three champions. The last time three straight Americans won was in 2010-12, when Peter Uihlein, Kelly Kraft and Steven Fox prevailed, respectively.