He stopped short of calling Greg Norman a liar.

Yet the nine-time major winner Gary Player did, somewhat jokingly, challenge The Great White Shark to take a lie detector test to get his true thoughts on what he thought about Chambers Bay, site of last week’s US Open. 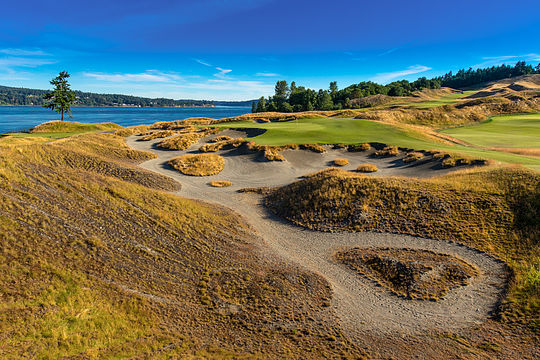 Norman was part of the Fox commentary team that watched Jordan Spieth win the Open and was glowing in some of his praise of the Washington site, which drew some stinging criticism from Player as well as competitors Ian Poulter and Billy Horschell.

Norman took almost the opposite tack. In the second-round telecast at one stage Norman said: “That’s a great sight there. That’s what it’s all about, this links-style golf.”

“If you get bored looking down, you just have to look out at Puget Sound and you’re going to go, ‘Ah, that’s why I’m out here’.”

Player was on The Golf Channel the following morning describing the US Open as the most unpleasant golf tournament he had ever seen in his life.

“It’s actually a tragedy,” he said.

“It would be a wonderful thing if we could take the announcers and give them a lie detector [test] to see if they are telling the truth on television.”

A few days later Norman agreed with that prospect on Twitter, suggesting he’d be happy to take a lie detector test to illustrate his true thoughts about Chambers Bay, the first time the American major had ever been played in the north-west of the US.