When two of the most powerful figures in the game have their say, well, the whole world is entitled to listen.

And when those figures are Jack Nicklaus and Gary Player – who have nine Green Jackets between them, then the US Masters seems the perfect time for the pair to have their say…and they did. 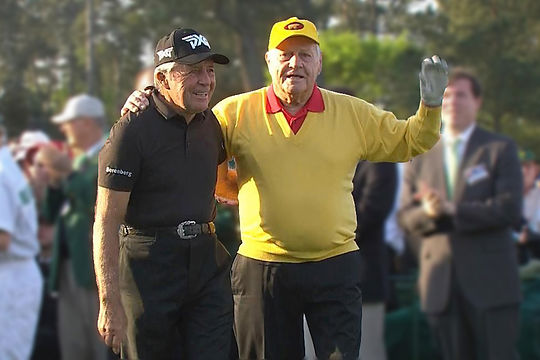 After hitting the traditional opening tee shots at the 2019 Masters, two of the greatest players the game has produced were quizzed about the state of the game.

And they were unified in their suggestion that something needed to be done about the golf ball travelling just too far in these modern times, reducing the greatest courses, like Augusta National and St Andrews to not much more than pitch-and-putt on so many holes.

“Probably the organisations won’t tell you that, but that’s exactly about what happened.”

Player agreed, urging the governing bodies to create a new ball for the professionals to use – otherwise they will soon be driving the first hole at Augusta National.

“They are going to hit wedges to all the par-5s, and golf courses like St. Andrews, this marvellous golf course, is completely obsolete.”

“They can drive probably six greens. So I don’t know where we’re going.”

“And our leaders [of the game] have got to get together now and form a ball for professionals that’s different to the amateurs.”

“But we have got to stop this, otherwise it’s going to be a joke, in my opinion.”

The two legends of the game also called for an end to green-reading books for the professionals, which are not allowed at Augusta National.

“I never saw him take out a book to read the damn green. If you can’t read a green, you should be selling beans. It’s part of the game.”