Player shoots 202 at US Amateur qualifier on purpose

Frustrated with your golf game? Well, you could not possibly be as upset as one player, who it has been revealed shot a score of 202, that’s right, 202 in a US Amateur event qualifier in West Palm Beach, Florida.

He was later disqualified for allegedly “failing to play in the spirit of the game.” 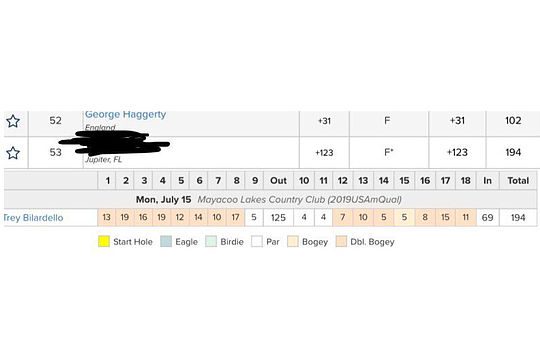 And what makes the score even more gob-smacking is the fact the player, Trey Bilardello, is also a former tour caddie on the US Tour, with his most recent player being the accomplished pro Matt Every.

Bilardello must have been upset about something, because he certainly ruffled a few feathers.

While the scorecard allegedly showed that he shot a 194 total, equating to 123-over-par, it was later revealed that the score was really 202 as a glitch in the on-line scoring system prevented numbers greater than 19 being posted on any hole being submitted.

According to a report, Bilardello, who was playing in the first group, was holding up the pace of the field when he began deliberately missing shots, especially around the green.

“Serious misconduct and failing to play in the spirit of the game” was the reason for the disqualification, USGA senior director of championship communications, Beth Major told US Golf Digest.

“His disqualification was deemed appropriate as a result of the individual’s failure to show consideration for other players – deliberately playing away from the hole to run up his score,” Major said.

His playing competitor Kristian Fortis later explained: “After the first nine, he said that he wanted to shoot the highest recorded score in USGA history.

“He was really rude to a lot of the officials, too. Something was off.”

“He would chip shots and scoot his ball around on the tee box just to add strokes.”

“And then he would just pipe a two-iron down the middle of the fairway, hit it on the green and then just scoot his ball around again with his putter.”

“He’d be right next to the hole and then I guess he’d think to himself that he didn’t have enough strokes and he’d hit his ball in the opposite direction of the hole.”