It was a sea of red and black on Sunday at the WGC-Workday Championship and a sure sign of just how much Tiger Woods means to the game of golf and those players who benefit from what he did for the game each and every week.

Woods’ stardom bought enormous wealth to the PGA Tour with last week’s $10.5 million WGC purse a prime example. The $1.82 million first prize cheque that winner Collin Morikawa took home on Sunday is a third of what Jack Nicklaus made in his entire career. 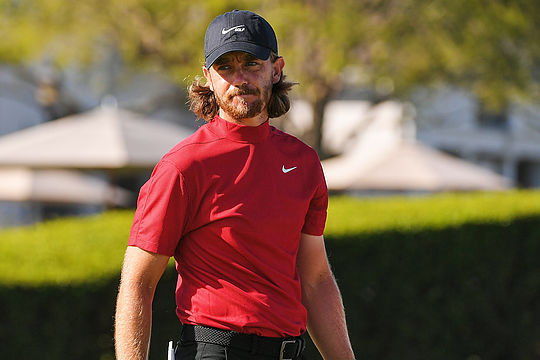 Take the Houston Open with a prize pool of $1.6 million in Woods’ breakout year in 1997, by 2005 that figure had ballooned to $5 million. And how about The Masters? In 1997 just $2.7 million was on offer the year Woods won his first major but by the time Woods won his 4th Masters title in 2005, the purse sat at an incredible $7 million.

And with close to $55 million in the bank from the PGA Tour alone, it’s no surprise that close friend Rory McIlroy was amongst those who donned the red and black in the final round of last week’s World Golf Championships-Workday Championship.

McIlroy joined the likes of Patrick Reed, Kevin Kisner, Tommy Fleetwood, Tony Finau, Cameron Champ, Jason Day and others in wearing Woods’ traditional Sunday attire of a red shirt and black trousers in the final round of the Workday WGC at The Concession.

“I guess for us it’s just a gesture to let him know that we’re thinking about him and we’re rooting for him,” said McIlroy.

“Obviously things are looking a little better today than they were on Tuesday, but he’s still got aways to go.”

“I think just for everyone to show their appreciation for what he means to us out here. If there was no Tiger Woods…the Tour and the game of golf in general would be in a worse place. He’s meant a lot to us, he still does mean a lot to us and I think that was just a little way to show that.”

And it didn’t stop at just the PGA Tour with longtime “arch-rival”, Phil Mickelson, honouring Woods by wearing a red shirt underneath a black sweater in the final round of the Champions Tour event in Arizona.

Even Annika Sorenstam got into the action on the LPGA Tour where she was returning to action for the first time in 12 years and making the cut before finishing last.

While for a lot of players, including last week’s Genesis Invitational winner, Max Homa, sponsorship commitments meant that they weren’t able to honour their hero.

After copping grief on social media, Homa took to Twitter to clear things up.

“I am contractually obligated to wear clothes with certain logos on them that I can’t buy at a Dicks/Pro shop/Roger Dunn/Walmart/“a store”/etc. Thank u all for the options tho!”

“I love Tiger more than u guys. Promise. Listen to an interview from last week. Red and black tomorrow doesn’t prove that. A lifelong attempt to mimic his approach to the game of golf does.”

“It is hard to explain how touching today was when I turned on the tv and saw all the red shirts. To every golfer and every fan, you are truly helping me get through this tough time,” tweeted Woods.