Poland isn’t known for its golfing prowess. In fact, the Polish Golf Union was only set up in 1993 and it took another 26 years before a player from that country would win on the European Tour.

And that player, a now-three-time DP World Tour winner, Adrian Meronk, is our new Australian Open champion after taking down his childhood idol, Adam Scott, to claim the historic Stonehaven Cup on Sunday. 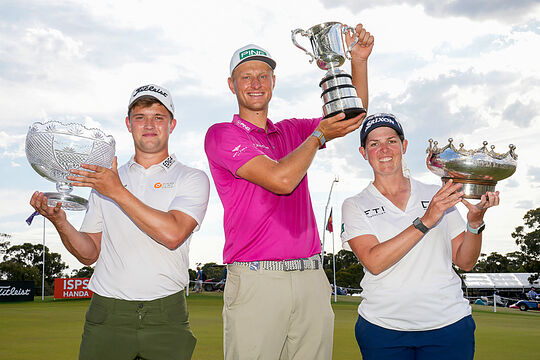 Meronk showed few early signs that he would be facing off with Adam Scott on Sunday. A 3-over 73 saw him finish day one in a share of 103rd place and eyeing off an early start to his Christmas holidays.

However, the lanky 6-foot-6 Pole, came out swinging it much better on Friday to close with a 66 and book his place for the weekend. Meronk then doubled down in the third round with a 7-under 63 before closing with another 66 to finish on 14-under and five shots ahead of Adam Scott.

The victory means much more than the money and fame. The 29-year-old is expected to move inside the top-50 players in the world and earn a start at his first US Masters in April next year.

“That was definitely on my mind coming into these two weeks in Australia, to improve my ranking,” said Meronk.

“I’ll just wait until tomorrow when the ranking comes out but I think that gives me a good chance to be inside top 50 and playing The Masters. That’s an unreal feeling.”

For Scott, it was a case of yet another near-miss. The 2009 winner has now racked up three runner-up finishes at the tournament along with a handful of top-10’s.

“I just enjoy playing in front of an enthusiastic home crowd. I wish I could have delivered a better result for myself and them today but I was outplayed and that’s how it goes,” said Scott, who will now take a well-earned break after competing in the inaugural 36-hole Cathedral Invitational on Monday and Tuesday.

Min Woo Lee took outright third spot with weekend rounds of 65 and 69, the talented Western Australian earning one of three Open Championship spots on offer in the co-sanctioned event.

Fourth-placed Haydn Barron and Alejandro Canizares will join Lee as the other lucky recipients of a start at Royal Liverpool next July.

South Africa’s Ashleigh Buhai won her second Open title of the year with a final round 73 enough for a one-shot victory over Jiyai Shin in the Women’s Australian Open. The Aussie trio of Hannah Green, Grace Kim and Minjee Lee rounded out the top-5.

England’s Kipp Popert won the Australian All Abilities Championship by seven strokes over Canadian Kurtis Barkley, whose overnight lead evaporated with a final round 7-over 79.

This week’s $200,000 Gippsland Super 6 at Warragul Country Club in Victoria marks the final tournament of the season. Play will return with the TPS Victoria in late January.