Poom on top as Rose’s putting woes halt No.1 ascent

Justin Rose missed out on a return to the top of the world rankings by one stroke after carding the worst round of his weekend at the Indonesian Masters.

The Englishman headed into the final day knowing a top-12 finish at Royale Jakarta Golf Club would see him overtake American Brooks Koepka and return to World No. 1.

A two-way tie for 16th or better at the Indonesian Masters, a tournament in which he won by eight strokes the previous year, would allow him to leap Brooks Koepka. A T-12 or better would mean he would remain No. 1 as at Jan. 1, 2019.

But instead Rose posted a three-over-par 75, including a triple bogey, to miss out on a tie for 12th by one shot to finish in a share of 13th position.

After two rounds of 68 before a 71 on Saturday, Rose was tied for fourth at nine under par heading into Sunday’s play and looked well placed to regain top spot.

However, the 38-year-old recorded two bogeys and a double bogey in a horror start for the opening five holes, before briefly pulling himself back into contention with birdies either side of the turn.

Rose’s round came undone again at the par-five 12th, when he had a gettable birdie putt but ended up with a triple bogey, which he followed with another bogey at the 13th.

This wasn’t the first near-miss for Rose in claiming the top spot back for the third time in the last six weeks after becoming World No. 1 for the first time in September.

Two weeks ago at the Hero World Challenge, Rose needed a tie for second yet was narrowly pipped when Tony Finau made a long birdie on the 72nd hole to grab solo second.

The final top-5 for 2018 is expected to be – Brooks Koepka, Justin Rose, Dustin Johnson, Justin Thomas and Bryson DeChambeau. 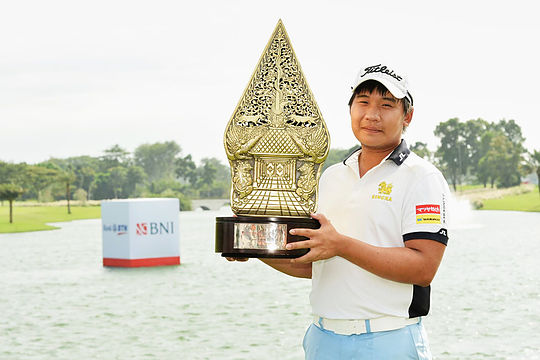 Thailand’s Poom Saksansin finished on 20-under-par to win the championship by three strokes.

Despite being ranked 239th in the world, Poom played unflappable golf to record his second Indonesian Masters victory having won the title in 2016.

“I wasn’t even thinking about winning or losing,” said Poom.

“I was just thinking about playing alongside Henrik (Stenson). I am very excited right now and I look forward to a better season next year. I can’t wait to come back and defend my title.”

Steven Jeffress was the best of the Australians with his six-under-par total and share of 17th place.