Germany’s Sophia Popov claimed her maiden Major title as she held off international challengers to win the British Women’s Open at Royal Troon.

The 27-year-old, who came into the championship ranked 304th in the world and without a main tour victory, recorded a stunning two-stroke success with a final round three-under 68 to post a winning total of 7-under-par to become the first German to win a women’s Major championship. 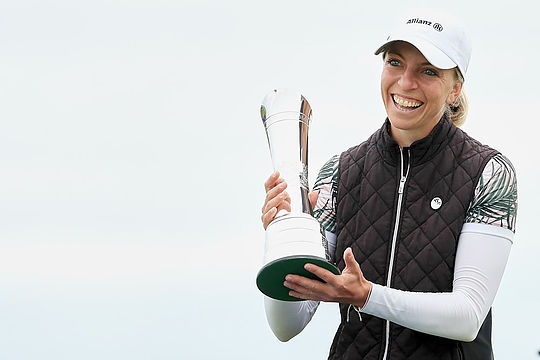 Popov, who played as an amateur at the British Women’s Open in 2011, was ecstatic with the victory.

“It feels amazing. There’s a lot of hard work behind it, and a lot of struggles that I went through the last six years, especially health-wise [due to Lyme disease]. I’m glad I stuck with it.”

“I knew my game was in really good shape. I know anything’s possible and I think I took that belief with me to every round, but I never expected this. Obviously, I was nervous the whole round and I’m just so glad I could get it done.”

What’s In The Bag: Sophie Popov

For Minjee Lee is was another stellar performance from the Australian with her 3rd place finish an equal best in a Major after finishing 3rd at the ANA Inspirational in 2017.

“To be honest, Sophia played so well pretty much all day, and whenever she looked like she was going to make bogey, she would make a par putt, and she made a lot of birdies out there,” said Lee.

“I don’t think anybody could have beaten her today. At the beginning of the week, if you said I would have finished third in a Major championship, I’d take it any day. I was a little bit disappointed in my ball-striking, but other than that I had a pretty solid week.”

Katherine Kirk was the next best Aussie sharing 22nd position, with Hannah Green a stroke behind in a share of 29th position. Sarah Jane Smith and Steph Kyriacou rounded out the Aussies to make the cut finishing in 70th and 72nd place.