Daniel Popovic has completed one of the most remarkable wins in the history of Australian golf, fending off a charge from Rod Pampling to win the Australian PGA championship at Coolum.

Popovic, ranked 1251th in the world, led from the opening day and held his nerve over the remaining 54 holes to secure his maiden professional win. 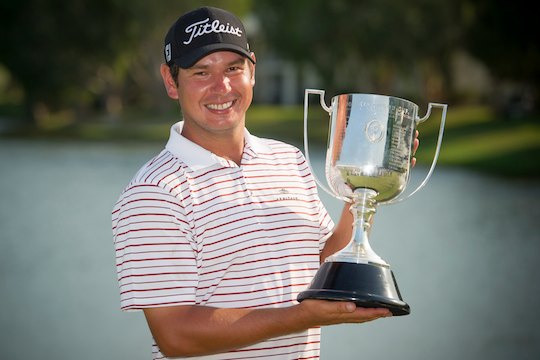 “I kept saying to myself that this is not difficult,” said Popovic.

“All week I had installed confidence in my game, yes I was nervous when Rod [Pampling] made his charge, but I kept saying to myself, ‘I’m not out of this’. I never doubted myself today and that’s something that I very proud of doing.”

Pampling started his final round with six consecutive birdies to move to 15-under. By the sixth Pampling was equal with Popovic.

A double bogey by Popovic on the eighth opened the door for Pampling, yet the veteran imploded as he lost his drive on the 16th to then go onto record a bogey, bogey and a double on the 18th.

While Pampling was struggling to finish the tournament off, Popovic finished in style, reflective of his new found confidence having changed his putter before this tournament.

All week Popovic putted beautifully, and today he was no different. 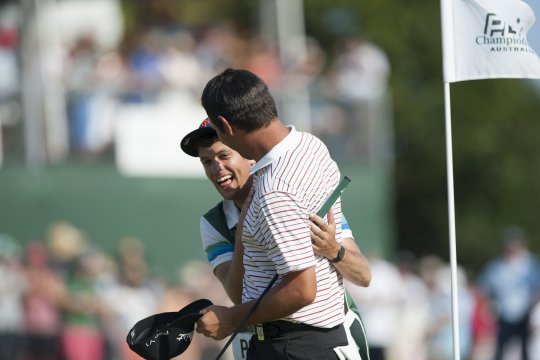 Daniel Popovic and his caddie are all smiles after winning the Australian PGA championship title (Photo: Anthony Powter)

Popovic hit an unbelievable shot into the 17th, then made the putt to extend his lead to two shots.

Walking up the 18th holding a four stroke lead, Popovic looked every bit the champion.

When he nudged his putt to two feet to secure one of the biggest Cinderella stories in Australian golf history, the emotion was evident in Popovic’s face.

He had pulled off a majestic, gutsy and inspiring win.

“I can’t believe this has happened. I really just can’t believe it,” said Popovic, who intends to forge ahead in Europe next year in an attempt to eventually play his way onto the US PGA Tour.

“2013 is going to be completely different to what I had planned two weeks ago. Two weeks ago I entered Q-School, but now next year is just going to be bigger and better.”

Popovic picked up $225,000 for his win and entry into one of next year’s World Golf Championship event.

“I’ll play every single tournament that I can,” says Popovic.

“I try and win and just keep grinding away and try to get to the eventual goal – ultimately it is the US Tour.”