Haydn Porteous has made it back-to-back wins for the young South African brigade on the European Tour with a two-stroke victory at the Joburg Open on Sunday.

Brandon Stone was triumphant last week at the South African Open and it was his former Eisenhower Trophy teammates Porteous and Zander Lombard who were in the thick of contention this week, with 21-year Porteous shooting a final round three-under 68 for an 18-under par total to take the crown and a spot in The Open Championship at Royal Troon in July. 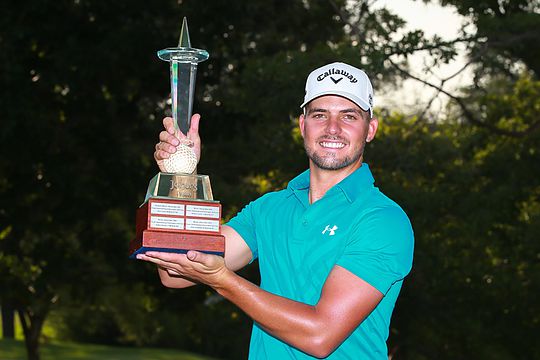 “Words can’t describe how I feel right now, it’s surreal to be honest,” Porteous said, “There was a lot of sweat and tears and I can’t get over this feeling right now.”

“When I get home and things start to calm down I’m going to have a proper think about it. All the doors that are open because of winning the Joburg Open, it’s a dream come true.”

The powerful Lombard, who turns 21 this week and impressed Australian audiences with his fourth place finish at the Australian PGA Championship at Royal Pines in December, birdied the last hole to claim second spot.

He joins Porteous at Royal Troon as will English veteran Anthony Wall, who repeated his success in The Open Qualifying Series in South Africa, earning a place in The Open for the second year in a row.

The 40-year-old finished in a tie for third place on 15-under-par alongside Sweden’s Bjorn Akesson, Daniel Im of the US and South Africa’s Justin Walters and earns his placed based on his higher position in the Official World Golf Ranking.

NSW’s Dimi Papadatos was the best of the Australians at seven-under par (T31), ahead of Jason Scrivener (T44).

Next week sees the European Tour in the Middle East for the Abu Dhabi Golf Championship and the first appearance for 2016 of world number three Rory McIlroy, who has been practicing in Dubai for the past few weeks in preparation for the season ahead.

McIlroy will be joined by the cream of the European Tour, including Henrik Stenson, Lee Westwood, Martin Kaymer, Ian Poulter, Branden Grace and Danny Willett, in an attempt to thwart the American challenge in the form of world number one Jordan Spieth and Rickie Fowler.

Spieth’s debut in the region has golf fans buzzing for what shapes as one of the most exciting events anywhere in the world in 2016 thus far.