American J.T. Poston shot an 8-under 62 on Sunday for a one-stroke victory at the Wyndham Championship in the PGA Tour’s regular-season finale. Poston finished at 22-under for his first PGA Tour victory at 26-years-old and in his 51st career start.

Poston played a flawless four days of golf at Sedgefield Country Club in Greensboro, North Carolina in a bogey free tournament that included 51 pars, 20 birdies and an eagle. Saving his best for the final round, Poston fired his tournament low round of 62 to pip 2012 US Open champion Webb Simpson by a stroke and Ben An by two.

“Any win out here on Tour is a dream come true, but to do it here in North Carolina, an hour and a half from where I grew up…I had so many friends and family, people who came in this morning, last minute,” said Poston.

“I probably haven’t had that many bogey-free rounds this year. To be able to do four in a row is pretty special, and finish it off with a 62 on Sunday is pretty awesome.”

With the victory he receives a two-year PGA Tour exemption and will make his Masters and PGA Championship debuts next season.

Cameron Davis was the best of the Australians finishing in a tie for 22nd position. The result sees the former Australian Amateur and Open winner finishing the regular season with four top-25s. By finishing between 126th and 200th in the FedExCup standings (160th), Davis qualifies for the three-event Korn Ferry Tour Finals to earn a PGA Tour card for the 2019-2020 season.

Matt Jones missed the cut but narrowly scraped into the finals series at 115th on the FedExCup standings to make the playoffs for the fifth time in his career.

Jones last qualified for the Playoffs in 2015, where he advanced to the BMW Championship and finished No. 44 in the standings. 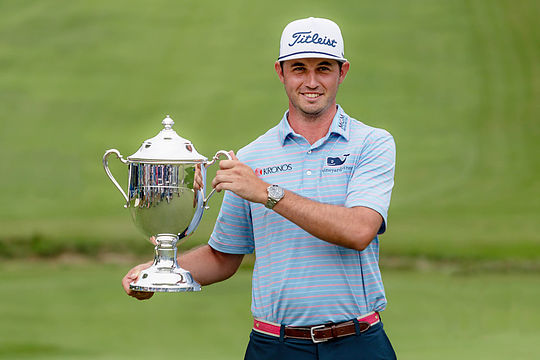 Curtis Luck was another to miss the cut and like Davis by finishing between 126th and 200th in the FedExCup standings (175th), Luck qualifies for the three-event Korn Ferry Tour Finals to earn a PGA Tour card for the 2019-2020 season.

Other Australians to miss the cut were Cameron Smith yet he finished 79th in the season standings to advance to the playoffs for the third consecutive time after banking three top-10 finishes on the PGA Tour.

Sydney’s John Lyras, an amateur Monday qualifier, made his PGA Tour debut and announced in the process that he was turning professional having done what he wanted in amateur golf in Australia.

He began nervously yet came home strong to finish at 3-over to miss cut but in the process gained valuable experience on the world’s hardest tour. Rod Pampling also missed the weekend.

The first of three legs of the FedEx Cup Playoffs begins on Thursday with The Northern Trust at Liberty National in Jersey City. The stacked field is headlined by Tiger Woods, who is making his first start since his missed cut at the Open Championship.