In the 36-hole final, Potgieter won 3&2 with a masterful display of golf, jumping out of the gates early on in the final. In the morning session, Potgieter dominated the contest thanks to a bogey-free four-under-par 66 to enjoy a seven-up lead at the turn.

Bairstow then made a mini-resurgence to get back to 2 down with four to play but he couldn’t complete what would have been one of the most stunning comebacks in British Amateur history.

Potgieter, ranked 140th on the World Amateur Golf Ranking, earned a berth in The Open at St. Andrews next month. According to tradition he should also receive a start at next year’s US Open and an invitation the The Masters.

“It’s really amazing,” remarked Potgieter. “I can’t really find the words, there’s no feeling like it and I haven’t felt this good before. The words can’t even come out of my mind.”

“On this golf course, going bogey-free on the first 18 holes was incredible for me. I played really well and everything worked out well. I knew Sam was going to do better than he did this morning. He didn’t play too well, but I knew he was going to come out strong. He wasn’t going to give up. I just had to play steady and keep my lead.” 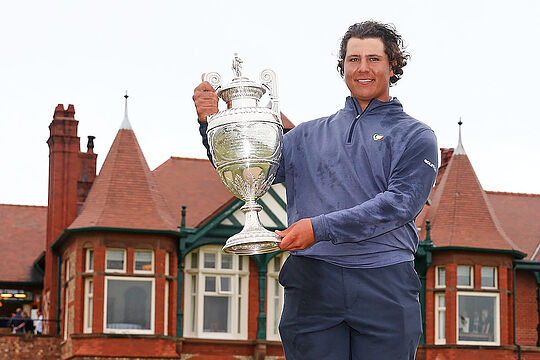 US collegiate-based Max Charles was the best of the Australians making it through to the quarter-finals before going down to Ireland’s Alex Maguire, 2&1. Charles was the top Aussie to qualify finishing the 36 hole stroke component in a share of 10th position.

Jasper Stubbs made it through to the round of 32 before losing to Sweden’s Ludvig Aberg. Josh Greer also went down to Wales’ James Ashfield, 6&4.