Ted Potter Jr. claimed his second PGA Tour win at the AT&T Pebble Beach Pro-Am on Sunday with a three shot victory and in the process held off hard-fought challenges from the world’s best including Dustin Johnson, Phil Mickelson and Jason Day.

Potter started the final round Sunday tied with Johnson and throughout the day, Mickelson and Day each made a run at the 34-year-old American who had 46 missed cuts and only four top 10s in his previous 83 starts on the PGA Tour.

Yet he managed to dig deep and collect the biggest pay cheque of his career banking a US$1,332,000 check and a start at the Masters.

Potter closed with a 3-under 69 and didn’t drop a shot after a three-putt bogey on the opening hole.

“I’m so happy right now to get it done today, especially against the world No. 1, playing with him today,” said Potter. “The win here at Pebble is just unbelievable.” 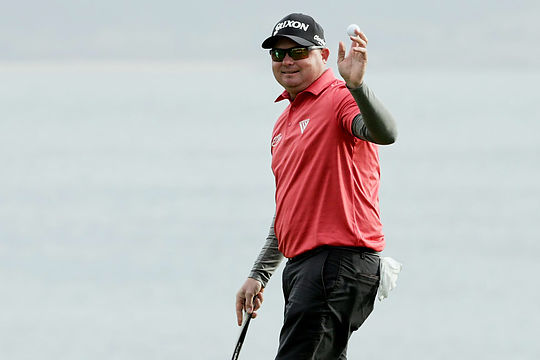 “A few iron shots cost me a few bogeys,” said Johnson, who finished the weekend in 70-72. “Two under in 36 holes is not too good as well as I thought I was playing. I’d like to have put a little more pressure on Ted.”

Day also had his opportunities to win, standing on the 18th tee he needed to make eagle to be in the running but hooked his drive off the tee before making an improbable par from the beach.

The Aussie posted a two-under 70 on Sunday to join Mickelson, Chez Reavie and Johnson three strokes behind Potter. Straight off a win at Torrey Pines, Day recorded his third straight worldwide top-5 finish. Now ranked eighth in the world, Day has not finished outside the top-25 since last year’s Open Championship.

“It’s good. I know can I improve. I feel like there’s a lot of room for improvement,” said Day.

“Wasn’t as great as it was at Farmers, but there’s still a lot to improve on and if I keep doing what I’m doing, finishing first and second in the first two events, but also improve that and kind of cut out the blemishes, then hopefully it will be more like 2015.”