Ian Poulter’s journey from his home at Lake Nona to Hong Kong for the UBS Hong Kong Open has to be one of the most bizarre trips of the season.

Here under is a complete diary of Poulter’s movements from the time he received a text message from the European Tour regarding his Race to Dubai status till he walked off the suburban Fanling Hong Kong Golf Club course with a very respectable three under par 70 on the opening day of the co-sanctioned event. 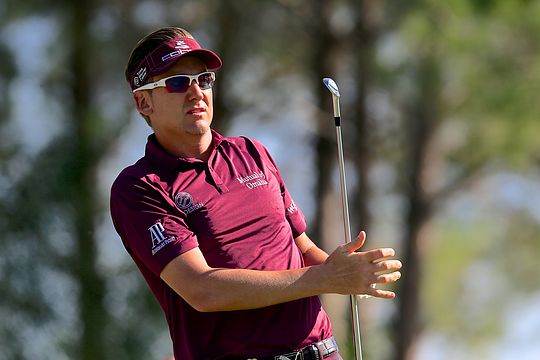 Poulter has contested just nine Race to Dubai events this season and needs to play 13 or lose European Tour membership.

He was looking to qualify for the Final Four Series but being outside the top-50 Poulter is now ineligible.

Poulter receives a text message from Keith Waters, European Tour Director of International Policy who asks ‘if it’s possible’ could he call Waters.

Poulter phones Waters and explains the situation regarding his Race to Dubai stature but no doubt shocks Waters revealing he does not have a valid UK passport but indicates a renewal is due to arrive at his Lake Nona resident early Tuesday morning US time.

As Poulter, and winner of the 2010 UBS Hong Kong Open, has not entered the event Waters advises that in order for him to play the minimum number of events American Rich Beem, who was surprisingly afforded an invitation, has agreed to step down and allow Poulter to accept the invitation.

Poulter is present at a hotel in Orlando hosting a number of UK children who have travelled to the States under the Dreamflight Home program, a UK-based charity that helps to change young lives through taking children with a serious illness or disability, without their parents, on the holiday of a lifetime to Orlando.

“I was at the Dreamflight hotel helping my wife, Katie who is helping looking after a couple of the kids who have come across from the UK for the week,” said Poulter.

“So I packed my suitcase on Monday night and I remained at the Dreamflight hotel till late Monday night till about 1.30am Tuesday morning before dashing home for a couple of hours sleep.”

Poulter awakes at 6am and phones the gatehouse on the Lake Nona Estate to advise them to call him the minute a FedEx courier van delivering his UK passport arrives.

Poulter’s passport is delivered at 7.15am and 45 minutes later he is in a car headed for Orlando Airport to board a flight to New York.

Poulter steps off having travelled a distance from his Lake Nona residence to the former UK colonial outpost of some 9,100 miles and crossed 12 different time zones.

The Englishman is met at the airport and conveyed to his hotel. Poulter travelled without long-time caddy Terry Munday and asks UBS Hong Kong Open officials if they can arrange a caddy for him.

Poulter tees up in round one of the UBS Hong Kong Open alongside Rikard Karlberg and Aniban Lahiri.

Some four-and-a-half hours later Poulter walks off the course posting a three under par 67 that included five birdies but also two bogeys,

“I saw Rich in the hotel this morning and went over to him to say it was awfully kind of him to do what he did,” said Poulter.

“He didn’t have to but it was kind of him and I thanked him.

“So I guess in the circumstances it was a pretty good round of golf. If I could have of nudged a 3-footer in for birdie on seven to get to three under par would have been good and the start I would have been looking for.

“But I didn’t and then bogeyed eight and nine and it took me a while to get back to three under so overall I played pretty nicely on a golf course I had to get to know again pretty quickly.

“So I have to be happy after getting in so late last night.”

Poulter returns to his Hong Kong hotel for a well-earned sleep.