Poulter finished at 15-under-par, three clear of Marcus Fraser with overnight leader Ogilvy firing a 2-over-par to finish at 11-under-par and in third position. 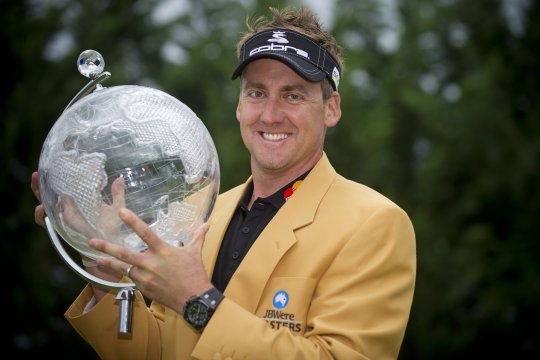 Poulter set up his victory with a strong opening nine that included an eagle two at the first hole to move alongside Ogilvy. The 15-under-par winning score a result of rounds of 65-68-69-67.

Despite his local knowledge, Ogilvy appeared uneasy with his game throughout the final day.

His frustrations were further compounded by the strong northerly winds that lashed the Victoria layout making putting difficult.

Ogilvy slipped further back with bogeys on the 13th and 15th holes.

When Poulter drained a 20 footer for birdie on the 178 metre par 3 16th, Ogilvy’s chance of victory had been closed out and when Ogilvy proceeded to double bogey the 17th it became obvious Poulter would be holding the crystal ware.

Marcus Fraser’s form continued on from the Australian PGA where he finished runner up to Greg Chalmers after loosing in a three-way play-off.

Fraser carded rounds of 70-69-69 and a sensational final round a 7-under-par 64, an unbelievable round given the conditions where just twelve players broke 70.

British Amateur champion, Bryden Macpherson, was the low amateur finishing in a tie for 40th after a final round 67 placed the US based Victorian at 1-over-par for the tournament.

World number one, Luke Donald, finished in a tie for 12th position at 4-under-par.

The win takes Pouler’s worldwide tournament victories to twelve but more importantly moves the Englishman inside the world’s top-20.

That guarantees starts in all the 2012 elite fields, with the win in Melbourne propeling Poulter to 17th and lucrative sponsor incentives based on performances on the US and European tours.