Englishman Ian Poulter is back to defend his Australian Masters title at Kingston Heath this week and the confident and charismatic world No.15 has overtaken Australia’s Adam Scott as tournament favourite.

Poulter has become one of golf’s hottest names in recent months with his win in the WGC-HSBC Champions event in China and his role in bringing home the Europeans at the Ryder Cup with his 4-0 record for the week at Medinah. 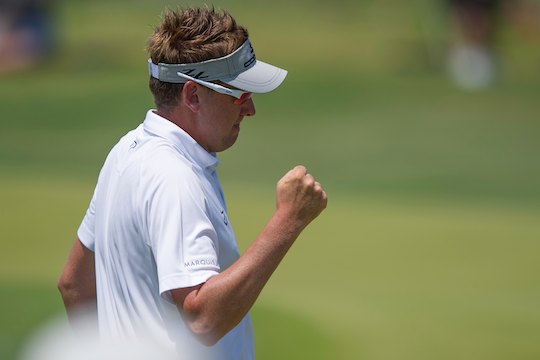 “I am delighted to return to Melbourne to defend my title,” said Poulter.

“I thought Victoria Golf Club last year was an outstanding layout and I have heard a lot of great things about Kingston Heath. I’m looking forward to playing the sandbelt.”

Greg Norman remains the only player in the 33 year history of the Masters to successfully defend the title.

Australia’s top-ranked player Adam Scott, the world No.6, will play the Masters for the first time since 2009.

That was when it was last played at Kingston Heath and huge crowds flocked to watch Tiger Woods win what was his first event in Australia in 11 years when he carded at 14-under-par total for a two shot buffer over Greg Chalmers.

Whether a similar score will win this year’s event is debatable given the recent ‘toughening’ changes that have been made to Kingston Heath.

New tees designed by Ogilvy-Clayton on the fifth, sixth and ninth have added 10 metres to each, with the 13th extended by 15 metres and the 18th by up to 25 metres, meaning the course will now play 6507 metres and on the same hole order as the 2009 Masters.

The Masters’ other drawcards include Irishman Graeme McDowell, the 2010 US Open champion, who has allayed fears that he might miss the event after jamming his hand in a door last week.

It’s McDowell’s first appearance at the Australian Masters and his first in Australia in seven years.

The Australian Masters in recent years has undergone transformation, reflective of IMG’s commitment with the Victorian Government back in 2008 to build and grow the event into a premier golfing tournament.

The 2009 Masters saw the start of the venue rotation policy and Tiger Woods appearance in Australia. The event was a total success with massive crowds and an impeccable display by Woods on the course.

2010 saw Stuart Appleby add another legendary name to the Australian Masters honour roll at The Victoria Golf Club. Appleby fired an equal tournament low, six-under 65 to finish at 10 under, ahead of fellow Australians Adam Bland and Daniel Gaunt.

2011 brought the worlds number one ranked player Luke Donald to Australia, however, it was Poulter who narrowed out Aussie Marcus Fraser.

A quick look at the honour roll of former winners confirms this event as being synonymous with Australian golf, as is the traditional presentation of the Gold Jacket to the victor come Sunday.