The always polarising Englishman Ian Poulter has put his money where his mouth this morning sinking a 20-foot birdie putt on the 18th hole to take the Houston Open into a playoff with Beau Hossler after both players finished on 19-under.

The 42-year-old Poulter parred the first playoff hole to win the title in dramatic fashion as Hossler’s dream run ended in a nightmare with a triple-bogey following a visit to the green-side bunker and then into the water to the left of the green with an over-cooked sand-wedge.

It was just a week ago that Poulter was mistakenly told he had snuck into the world’s top 50 and would be teeing it up at the Masters only to find out later that was not the case.

He certainly made amends today and will be on his way to Augusta National with his win elevating his world ranking inside the top 30 along with an all-important two-year exemption on the PGA Tour.

“Last week was painful. To come here this week I was tired and frustrated. I had packed my bags to leave on Friday night, and had a mental switch,” Poulter said.

“I was patient, I waited my time and this is amazing. I haven’t won a strokeplay event in the US before and to do it this week is amazing.”

With his impressive worldwide tally including 16 professional wins prior to this week, it may surprise some that he has never won a strokeplay event on the US PGA Tour. His major record is also impressive with 8 top-10 finishes with three of those coming at the Masters. 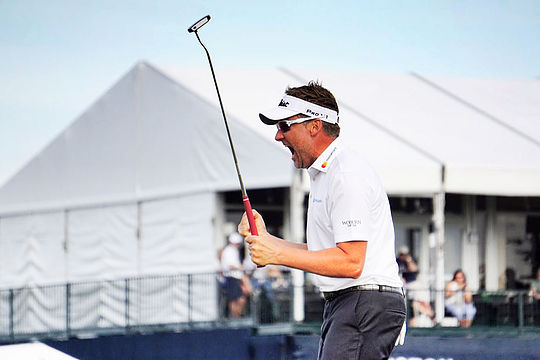 It was his first win since the 2012 WGC-HSBC Champions in China, which came shortly after Poulter, who as one of two captain’s picks that year, helped lead Europe to Ryder Cup victory at Medinah. He won all of his four matches and played an integral part in the historic 14½-13½ win over the US on home soil.

Texan Jordan Spieth closed with a 66 alongside Emiliano Grillo in a share of third place. It was his best finish since the Dell Championship in the FedEx Playoffs last September and signals a well-timed return to form for the former Masters champion.

Matt Jones topped the Australian field in a tie for 52nd place while Greg Chalmers fell 67 places into a tie for 70th following a horror final round 81. The Western Australian was well in contention after rounds of 67, 72 and 65 but fell apart under the pressure firing seven bogeys and ending with a double at the last.

All the world’s golfing eyes now turn towards Augusta National for the 2018 US Masters where four Aussies (Adam Scott, Jason Day, Marc Leishman and Cameron Smith) will line-up for one of the most highly-anticipated Masters in many years.