Ian Poulter and Adam Scott will battle for the Australian Masters trophy with their nearest opponents several strokes behind.

Poulter lies at 13-under, with Scott at 12-under par after the pair put on a near perfect display of golf at Kingston Heath. 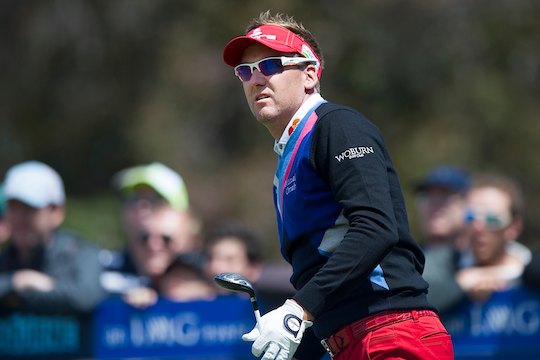 Ian Poulter follows his drive during the third round of the Australian Masters (Photo: Anthony Powter)

Opening round leader, Matthew Guyatt, sits five strokes behind Scott in third position after a third round 75 damaged his chances.

Poulter, the defending champion, and Scott were simply impressive in their move to break away from the field.

Poulter, who had at one stage threatened the course record, finished the day with an eight-under 64, which featured nine birdies and a bogey. Scott shot seven birdies and three bogeys for a five-under 67. 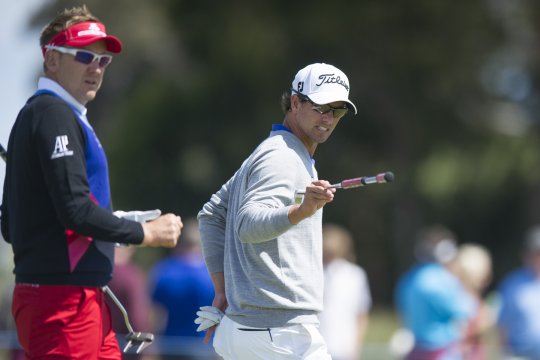 Adam Scott and Ian Poulter will battle out the Australian Masters with Poulter a stroke ahead going into the final round (Photo: Anthony Powter)

With a spring in his stride that matches his outfits, Poulter looks every part the defending champion and will take some stopping tomorrow.

“When you go out on this golf course with a reasonable breeze and produce a score like that you have to be happy,” said Poulter, who said playing alongside Scott helped his game.

“Collectively we had 17 birdies… It’s nice to play with someone you know really well. You feed off them, they feed off you, and I think that’s what we did today.”

Adam Scott knows he’ll need to shoot a low number if he is going to stop the in-form Poulter.

Despite playing the third round in a ‘defensive’ manner – as Scott described it – the Australian plans to take a more aggressive approach to the Kingston Heath layout in tomorrow’s final round.

“Scoring has been good this week,” said Scott.

“I’m going to have to shoot something in the 60′s to even think of having a chance. Ian is playing beautiful, so he’s not going to fade away.”

Out early this morning, Englishman Graeme McDowell returned to form at Kingston Heath, shooting a third round of 5-under 67 to move into the top 15.

Jake Higginbottom continued to impress as the leading amateur, the New South Welshman posting a 2-under 70 to sit in outright 8th position.