Ian Poulter trailed by nine shots halfway through the HSBC Champions at Mission Hills in China, but two closing rounds of 65 gave him a two-stroke triumph over Open champion Ernie Els and Americans Phil Mickelson, Jason Dufner and Scott Piercy.

Poulter fired rounds of 69-68-65-65 for a total score of 21-under-par for his first individual title since winning the Australian Masters last December in Melbourne. 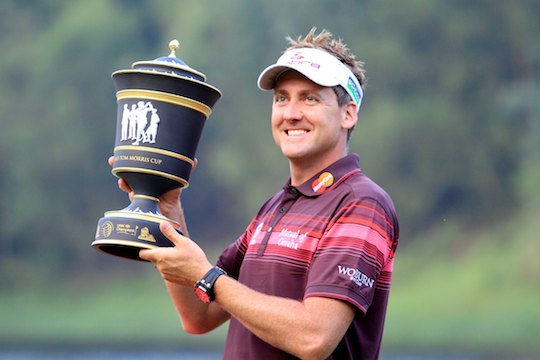 “It’s so nice to get my hands on another trophy,” said Poulter, who began the final round four shots back and in a share for fourth.

“I’ve been in good form for a while and knew if I did the right things and stayed patient I would be right there. It’s been an amazing six weeks.”

Poulter claimed the $1.16 million winner’s cheque, the 15th of his career, just a month after playing a key role in Europe’s come-from-behind Ryder Cup triumph at Medinah.

His next assignment will be the Australian Masters at Kingston Heath from 15-18 November where he is the reigning champion.

Australian Adam Scott shot a final round 67 to finish four shots off the pace in a tie for eighth with defending champion Martin Kaymer, one shot behind Louis Oosthuizen and Lee Westwood – who both faltered with last round of 72.

Five different players topped the leaderboard on the final day – and several others were close – due mainly to final round implosions from overnight leaders Westwood and Oosthuizen.

After a third round 61 had brought Westwood level with Oosthuizen, he went three clear early on in the final round, but double-bogeyed the short fifth to give up his two shot lead.

Westwood then followed with three back nine bogeys as his putting again broke down. That makes it a total of 100 majors and world championships in his career and the 39-year-old Westwood has yet to win one.

Oosthuizen also had his share of troubles with the putter and was never able to regain the form that had the 2010 Open Champion at 16-under after the second round – the lowest 36-hole score in a World Championship Golf event since they began in 1999.

Mickelson and Poulter made a charge when Westwood made bogey on 10, to join Westwood and Oosthuizen in a four-way tie for the lead at 19-under-par.

Poulter, turning in 32, nudged ahead with consecutive birdies on 10 and 11, and another on 14 to give him a two-shot cushion. A stellar up-and-down on 15 extended his lead to three.

He then make a difficult chip shot from the bunker on the 18th and sank a 10-foot putt to seal the victory.

Poulter was winless on the PGA and European tours this year before Mission Hills and was ecstatic with this win in China over a strong international field.

“I’ve only been one season without a victory and I certainly didn’t want to go another one,” said the 36-year-old.

“As well as I’ve played this year, it would have been a disappointment personally to have gone that year without winning.”