Seamus Power admitted it wasn’t pretty but the 35-year-old did enough to survive a final round war of attrition to capture the Butterfield Bermuda Championship.

Power fended off a challenge by American rookie Ben Griffin and then dealt with own demons to post a closing day 70 to be a one-shot winner on the windswept Royal Port course.

The victory is the Waterford golfer’s second Tour success in 15 months and will see him jump 16 spots to World No. 32, and the assurance at year’s end of a second straight Masters invitation come next April.

It is also a back-to-back Irish success on the PGA Tour with Power winning a week after Rory McIlroy successfully defended the CJ Cup in South Carolina, and in the process that sees Power take McIlroy’s fifth place standing on the 2022/23 FedEx Cup standings.

And there’s also $US 1.17m in ‘green backs’ for the player wearing emerald green shoe laces. 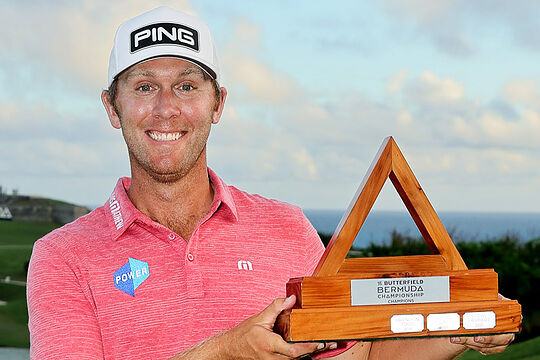 “It was hard work out there over the closing few holes, as it was hard to putt on the exposed greens but to get my second win, well I’m ecstatic,” Power said.

“I’m absolutely over the moon. The first one was amazing but to be able to win again, it’s fantastic. I get whatever, it’s pretty much a three-year exemption and all the kind of cool things that come with it. It’s just you’re kind of so proud and it’s amazing to be able to do it again.”

“I’d hit a poor tee shot at 15 and a poor shot at 18 and other than that, I don’t feel I did that much wrong but then I was really holding on there at the end, so while it wasn’t all that pretty I’m just glad to get over the line for victory.”

“Irish golf is great at the moment with Shane (Lowry) winning at Wentworth and with Padraig (Harrington) winning all over the place and with Rory, of course, winning last week and while I’m ahead of Rory on the money-list, I think it will be a losing battle. So, it’s a good Irish winning stretch we’ve got going.”

It was a cloudless final day but with the wind not letting up, and averaging around 35-40 kph, coming right off the Atlantic Ocean and turning the last day into a test of the fittest.

Belgium’s Thomas Detry (67) was runner-up at 18-under-par while Griffin saw his nightmare day end in signing for 72 and slip to a share of third at 17-under.

Aaron Baddeley lead the way for the Australians and following opening rounds of 65 and 64 he looked set to claim his fifth PGA Tour title. Weekend rounds of 68 and 71 saw him drop away to 6th place on 16-under and three shots off the lead.

Two shots back was PGA Tour rookie, Harrison Endycott, who shared the lead after an opening round 62. However the 26-year-old couldn’t keep up the pace and settles for outright 10th place and his second top-12 result in his rookie season.