When Kieran Pratt birdied the second play-off hole to win his first Asian Tour title at the Zaykabar Myanmar Open yesterday the Victorian could not have wished for a better start to the year.

Pratt, fellow Aussie Adam Blyth and Kiradech Aphibarnrat of Thailand were tied on 15-under-par to force a three-way play-off at the US$300,000 Asian Tour event. 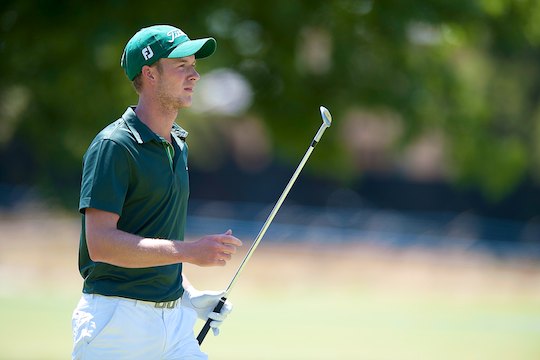 Starting five strokes off the pace, Pratt displayed pure grit and determination closing with a four-under-par 68, which included an eagle-three at the 18th hole which he sank from 15 feet.

“Fantastic. It feels great to win the first event of the year,” said Pratt, 23.

“I just kind of hung in there. I knew the leaders were not pressing and I thought if I hole a few birdies anything becomes possible.”

This is Pratt’s second year on the Asian Tour, having obtained his playing card at Q-School. During his rookie year in 2010 Pratt split his schedule between the Australasian and Asian Tour.

In Asia he played twelve tournaments, making money in six. In Australia he had better results, making the final pairings in a number of Tier Two events to bank some hard earned cash.

“You learn a lot in your rookie year,” said Pratt last December at the JBWere Masters where he finished sixth.

“It’s easier once you know the system and you can make changes to unexpected issues. I’m still learning about being on Tour, yet it somehow feels difference once you have done your first year.”

Not that Pratt is ever being backward in coming forward in dealing with challenges on tour.

You only have to wind back to one of his first outings as a professional and recall Pratt’s efforts during the third round of the 2010 JBWere Masters in Melbourne when he was paired with Tiger Woods.

In horrific conditions Pratt outplayed the former world number one during the round before recording a top-25 finish.

“That was probably still one of my best and most memorable rounds being with Tiger,” says Pratt, who as an amateur won the Dunes Medal, Victorian Amateur and Lake Macquarie Amateur.

“It’s a big transition coming from amateur golf into the professional arena. You have to have trust in yourself and in your game.”

Pratt is young, athletic and has nailed his maiden tour win in just his second season on tour as a professional. Watching Pratt swing as he unleashes the club with tremendous speed confirms a unique talent.

The win yesterday at Royal Mingalardon Golf and Country Club in Yangon, the former capital of Burma, was his much-needed breakthrough.

Opportunities in golf need to be seized upon as they arise and Pratt took full advantage of the situation yesterday.

To hold his nerve and win with a birdie on the second play-off hole is illustrative of Pratt’s steely resolve and the US$47,550 and two year tour exemption are the tangible rewards for success and self-belief.

“It was a nervous wait in the clubhouse, yet it was cool to sneak into the play-off,” said Pratt.

“Obviously you want to get off to a fast start but to win is obviously better.”