Preparation pays off for Lawson with QLD Open lead

Careful preparation was the key to Deyen Lawson’s success today at The Brisbane Golf Club during the first round of the Isuzu Queensland Open.

Having visited The Brisbane Golf Club last week with his Gold Coast-based girlfriend and fellow PGA Professional Alexandra Orchard, Lawson discovered the nuances of the layout and used that to his advantage today. 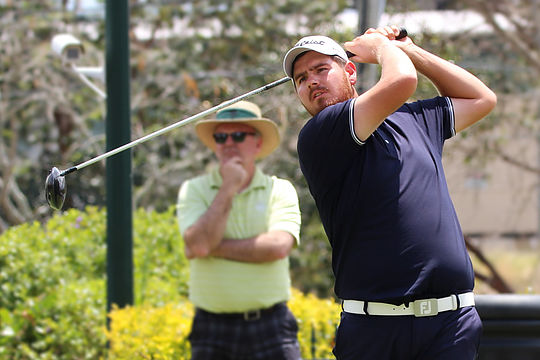 “I came up here on Friday with my girlfriend Ali, it was good to get up here and have a look at the course,” Lawson said.

“I played nine holes on Monday and then the pro-am Tuesday. I got to know the course and it’s definitely all about positioning here.”

Firing 5-under 65, Lawson leads by one shot from Steven Jones and Ben Clementson.

Playing on the ISPS HANDA PGA Tour of Australasia after completing his PGA Traineeship at Curlewis Golf Club in Victoria, Lawson believes he has the ability to mix it with the best on Tour.

And he’s not wrong. So far this year he has been one of the standout players, recording four top-10 finishes and sitting 10th on the Order of Merit, having him on the cusp of something special.

“I have enough self-belief, I really believe that I can contend in all the events and I just want to keep doing what I am doing,” added Lawson, who was motivated by his coach and PGA Professional Darrell Brown.

Before he can start dreaming of holding the Isuzu Queensland Open trophy, Lawson needs to keep firing over the next three days with plenty of talented players just behind him on the leaderboard.

Rounding out the top-5 behind Steven Jones and Ben Clementson are Gavin Fairfax, Alex Edge and leading amateur Brett Coletta, who all fired rounds of 3-under 67.

The second round of the Isuzu Queensland Open will tee off at 6.30am with Lawson on course at 6.40am.