Muirfield Village is no stranger to tournament golf or even International team events of the scale of next week’s 10th staging of the Presidents Cup.

As the host of the annual Memorial Tournament and the 1987 Ryder Cup matches – the first time a European team captured the Cup on U.S. soil – the town of Dublin in the city of founder Jack Nicklaus’ hometown of Columbus, Ohio is familiar with the pomp, ceremony and logistics of a week-long event like this. 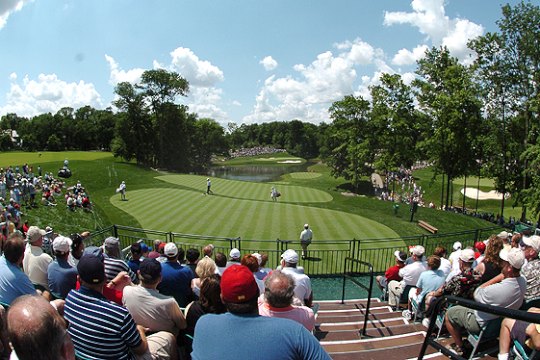 While the signage and hoardings will be different from what they’re used to, even veteran Memorial Tournament watchers may be taken aback by the transformation the golf course and grounds have undergone for the Presidents Cup.

For the 2011 matches, an enormous hospitality precinct, grandstand seating and corporate box facilities were erected on a scale not seen before at an Australian golf tournament, let alone at a ‘veteran’ tournament host site in Royal Melbourne.

Royal Melbourne’s expansive grounds were still not sufficient to house all of the facilities and the nearby Cheltenham Golf Course was by necessity, reformed into a multi-purpose facility including the practice range and short game area, the Opening and Closing Ceremony stage and seating and general car parking.

Muirfield Village this year is no exception with facilities dwarfing those normally in use for the Memorial Tournament, despite the contest featuring only 24 players.

By comparison, the Presidents Cup will feature 21 large electronic screens on course where The Memorial get by with traditional fixed and hand-held scoreboards.

Even car parking will be off site at Columbus Zoo whereas Memorial patrons have the luxury of parking on site each year.

The only aspect on the logistics sheet that The Memorial has in greater numbers are volunteers, over 3000 compared with 1,500 for the Presidents Cup, due mainly to the reduced number of matches on course during the Cup compared with a full field event.

Muirfield Village unveiled a refurbished clubhouse at this year’s Memorial, designed and constructed specifically with the Presidents Cup in mind and with the close involvement of founder and four-time Presidents Cup captain Nicklaus, who will play host to the Cup during the week.

The stage is set and the stakes high for The Internationals, who are seeking to ‘do a Europe’ at Muirfield Village and inflict the first loss on home soil to the home team by winning just their 2nd Presidents Cup.

By the way, the captain of that losing U.S. Ryder Cup team in 1987? Jack Nicklaus.