It’s not hard to realise the Presidents Cup is a huge event.

National loyalties and the feeling of being a team player in a sport otherwise dominated by individual experiences has something to do with it. 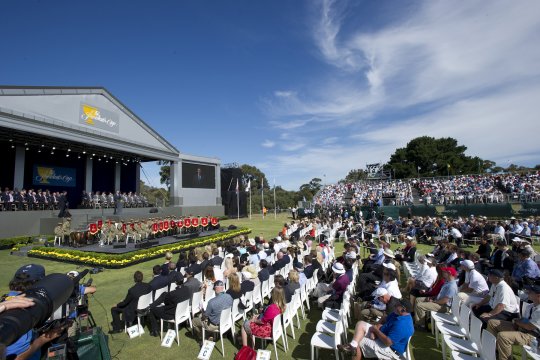 The opening ceremony to the 2011 Presidents Cup at Royal Melbourne. (Photo: Anthony Powter)

This evening’s opening ceremony nailed home the sense of what’s about to unfold over the ensuring four days at Royal Melbourne.

The Presidents Cup is something unique and the players know it.

A bonding through team spirit, player’s respective half’s looking every bit the part and the underlining desire by the PGA Tour to make golf a global game underpin this biannual contest between the USA and the rest of the world (excluding Europe).

You cannot help feel this is a major sporting event that’s sure to continue and develop the game.

PGA Tour Commissioner, Tim Finchem, announced immediately following the opening ceremony that the next international venue for the event will be the Republic of Korea.

While the specific site is yet to be determined, The Presidents Cup will make its first trip to Asia in 2015.

Times are a changing and the Presidents Cup moving with the times. The game is expanding and players are getting younger.

The next wave of young guns is even more prevalent following the announcement of Thursday’s pairings.

Young guns Jason Day and Aaron Baddeley will enjoy the whole-hearted support of the large galleries in their clash with Dustin Johnson and Matt Kuchar.

And it’s fair to assume that Day’s wife Ellie Harvey and Baddeley’s wife Richelle will wish nothing but the best for their husbands.

But as Ellie and Richelle are both Americans it makes interesting speculation as to where national loyalties lie.

“I think she’s rooting for the Internationals,” says Day. “She’d better be.”

Day is looking forward to teaming up with the US-born Baddeley, one of Greg Norman’s two captain’s picks along with Robert Allenby.

“I play in the States, I’m always seeing them and they’re a great bunch of guys,” says Day.

“But they’ve won it for the last six years so we’ve got to change something.”

Today’s announcement of Thursday’s team pairs also raised a few eyebrows, aside from the Tiger Woods – Adam Scott encounter with Woods’ ex-caddie Steve Williams due to face his former boss on the course for the first time since their split in July.

On the face of it, they’re the odd couple of the International team – 42-year-old South African veteran Ernie Els and Japanese sensation Ryo Ishikawa, at 20, the youngest competitor at the Presidents Cup.

But in the eyes of team captain Greg Norman, Els and Ishikawa are a perfect match to launch tomorrow’s proceedings.

“Ernie’s shot 60 around this golf course so he knows how to play Royal Melbourne,” said Norman.

“The two of them are communicating extremely well about how to play the golf course. It was a natural match-up as far as we can see it.”

On the USA front it was a different affair.

USA Captain, Fred Couples, went out of his way not to single out Tiger Woods’ role in this event.

It helps that Woods is coming off a third-place finish in the Australian Open last week, his best outcome of a short year because of injuries. The former world number one was within one shot of the lead twice on the back nine at The Lakes, only to finish two shots behind Greg Chalmers.

“For Tiger, he’s always got the ‘X’ on his back and everyone watches how he does,” Couples said.

“He had a great final round, and he’s pretty confident. In fact the whole team is confident.”

Much will depend upon the conditions.

For lovers of golf architecture, it doesn’t get much better than Royal Melbourne.

The site of this week’s Presidents Cup is generally regarded as one of the finest courses in the world, the work of Alister McKenzie, whose famous designs include Augusta National and Cypress Point.

The wind needs to blow, otherwise this grand old lady will fall victim to the modern game.

With gusts of up to 45km/h predicted for Friday, and more wind on the weekend, Norman declared the composite layout could ”eat your lunch” if not careful.

”For a golf course with no water on it and no out-of-bounds, you can be intimidated on some of these tee shots, I don’t care how good you are,” said Norman.

Robert Allenby is no stranger to the subtleties of Royal Melbourne and recognises the importance of local knowledge.

“It’s just one of those golf courses that you have to see first and learn how to play it second,” says Allenby who grew up playing in the area.

“You can’t play the course blind. You have to know it.”

That gives a decided advantage to the International team, which won the Presidents Cup for the only time when it was last played here in 1998.

With the pomp & formalities now out of the way following this evening’s grand opening ceremony, it’s time to let the golf clubs do the talking.

We’re set for a riveting four days of splendour and fantastic golf. Add into the mix the passion that goes with team based golf tournaments and Royal Melbourne is set to deliver!