It comes as no surprise that Internationals President Cup Captain, Nick Price is placing his trust in this year’s Presidents Cup in the cornerstone foursome of the Australian pair of Adam Scott and Jason Day along with the Springbok golfing duo of Charl Schwartzel and Louis Oosthuizen.

Price, who was a member of that 1998 Royal Melbourne winning side, spoke of the impact the four will hopefully have at this year’s Presidents Cup. 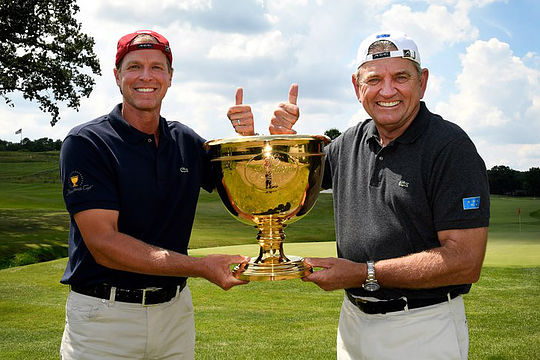 With the start of competition less than a month away, Price chose Emiliano Grillo of Argentina and Anirban Lahiri of India, while Stricker selected Charley Hoffman and Phil Mickelson.

Three Australians in Scott, Day and Marc Leishman, who went so close to victory on Monday in Boston, qualified automatically to join also three South Africans in Oosthuizen, Schwartzel and Branden Grace.

Sadly, just once since the inaugural Presidents Cup in 1994 has the Internationals tasted success and that was four years later in December 1998 under the captaincy of five-time Open Champion, Peter Thomson, at Royal Melbourne.

Of course, there was a 17-all draw thanks to the legendary Jack Nicklaus in 2003 at Fancourt in South Africa.

But unlike their European cousins who have dominated the Ryder Cup in recent years, the Internationals are one win, one draw against 10 loses.

Scott is again the backbone to the International Team and his selection now sees the champion Australian set to contest his eighth Presidents Cup and match the record number of appearances enjoyed by Ernie Els and Vijay Singh.

And Price spoke of the importance of the leading two Australians, Scott and Day, and the corresponding top two South Africans, will play in hopefully in denying the Americans on home soil.

“If you look at Adam and Jason and Charl, Louis, and the guys who have played a lot, they have never won, so this is a difficult — it’s tough for these guys, they don’t know what it’s like to win,” said Price.

“Ernie and I together, we’re the two guys on this team, the captains who have been there in a winning situation.”

“Last time in Korea, I had a big photo of the winning team in 1998, and I said to the guys in the team room before when we had our team meeting, I said, ‘You guys have got to know what that feeling’s like, to be with 11 of your teammates and to win, I said it’s a fantastic feeling’”.

And Indian No. 1 Anirban Lahiri believes Scott could be the key to the Internationals Presidents Cup team winning the biennial event for a first occasion on US soil.

Lahiri, who has struggled with his game in recent weeks, and along with Argentinean Emiliano Grillo were afforded ‘wildcard’ picks by Price when announced in a teleconference hook-up late Wednesday afternoon US time.

The India No. 1, who will be making his second straight International Team showing, believes a strong showing from Scott will be pivotal to the overall team efforts.

“Adam is an inspiration to all of us, especially my generation,” said Lahiri in the teleconference.

“He’s absolutely magnificent. Adam and I played in Korea two years ago. When he’s in full flight, it’s just amazing to watch him play.”