Returning skipper Nick Price is not doing much channel surfing at home in Florida at the moment, as he keeps a watchful eye on his players ahead of the automatic qualifying deadline for the Presidents Cup matches in South Korea from October 8-11.

Continental Asia hosts the Presidents Cup for the first time and Internationals captain Price will know the bulk of his squad following next week’s Deutsche Bank Championships in Boston, when ten automatic qualifiers will be settled for both the International and American teams. 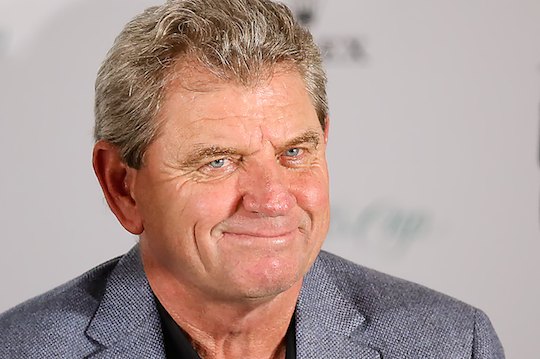 Price recently ran his eye over his likely squad and the considerations he’ll be making for the two additional captain’s picks he’ll choose to finalise the team on September 8.

“The guys are doing really well. You look right from the top with Jason Day winning in Canada and at the PGA and Barclays, then Louis and Marc Leishman who lost in the playoff for the British Open. Then you’ve got Louis and Jason and Branden Grace who played so well at the U.S. Open. So the top guys have got the form,” he said.

“If you look at Jason, he’s so positive in everything that he does. He’s got that bounce in his step on the golf course, I love the way he looks like he’s going to rip the course apart by the way he walks. He’s just got that really upbeat, positive attitude and he’s got quick eyes, he’s an ‘A’ personality and I’m sure he doesn’t get down too often.”

“Adam played such a wonderful role in the team room last time, being the veteran of the team now. He’s got this quiet confidence and resilience about him and also a wonderful sense of humour, which a lot of people don’t realise. He’s very funny. He’s a huge asset to the team.”

“They you go to Louis and Charl, great guys who’ve known each other for a long time. They’re not too scared to open their mouths to tell you what they think.”

“And Hideki Matsuyama, obviously his grasp of English is not very good although it’s improved a lot in the past few years and he certainly understands it better that he speaks it. He’s also a bit of a tiger and a very strong individual. He hit some phenomenal shots under pressure in the last Presidents Cup, I really like him and he’s a great team member too.”

Price may have had a small win with the PGA Tour recently in reducing the number of points (34 to 30) the Cup will be contested for, albeit the changes stopped short of mirroring the highly successful Ryder Cup (28 points) between Europe and the U.S. which has remained unchanged as a format since 1979.

However, the depth the Americans can call on is a factor he can’t totally mitigate against with rule changes. The two captain’s picks will be all important, as Price sees the back end of his team as critical to overturning the tide of American dominance that now stretches back a generation.

And form alone is not the sole factor playing on his mind as he considers options to complement his core group who at best, only get together as a team every two years.

“I’ll get with my vice captains and people like Adam, Jason, Charl and Louis and get them to tell me the names they think should be picked outside of the top-ten. We’ll then look at everything, maybe see where we’re short on experience and go from there.”

“The golf course over there is not a long hitter’s course. Tim Clark, for example, could play himself onto the team if he plays well in the next few weeks.”

“Let’s take a guy like Danny Lee who’s shown a lot of good form in the past few months. If he continues to show that form and doesn’t make it into the top-ten, then he’s certainly going to be at the forefront of my attention. He’s an explosive player, he makes a lot of birdies, and the other thing I really like about him is that he’s fearless. He looks like he’d make a good match player.”

“The other thing I’ve got to look at, Paul, is that if I’ve got an uneven number of Aussies on the team, it might be worth picking another Aussie. Same with the South Africans, so we have guys we can pair together. There are so many permeations to consider.”

“I would love a South Korean on the team. Poor Sang Moon Bae has had a tough time with this military decision hanging over him that he hasn’t played well in the past four months. There’s no doubt that has affected him but, he’s another one to look at as they’ve had two Tour events at this golf course we’re going to play at and he’s won both of them. I think he won the last one by 8 or 9 shots so he knows the golf course.”

“I saw him on the practice tee at the Bridgestone and I told him: “You have to show me some form these next 3 or 4 weeks and you’ll be a serious consideration.” I didn’t want to put any extra pressure on him but I didn’t want him to feel that the way he’s played the past 3 or 4 months means I’d totally forgotten about him.”

“It’s going to be a team decision although the buck will stop with me when the final decision needs to be made. Win, lose or draw — we’d really like it to come down to the last hole, the last match on Sunday, which is I think what everybody wants.” said Price.