Canberra’s Matt Millar has done it again. The 45-year has gone back-to-back in the adidas Pro-Am Series with victory at the Murray Open to go with his win at the recent Stuart Appleby Cohuna Pro-Am.

The 2015 NZ PGA winner was impressive en route to his 10-under total holding off much younger rivals Charlie Dann and Elvis Smylie with just one dropped shot across his 36-holes at Murray Downs.. A course record 64 followed by a 70 leaving him three strokes ahead at the close of play.

“I’m really happy with that,” Millar told PGA Australia after his round. “I’ve been coaching a lot during COVID and so to come out and play well straight out of the blocks is great.” 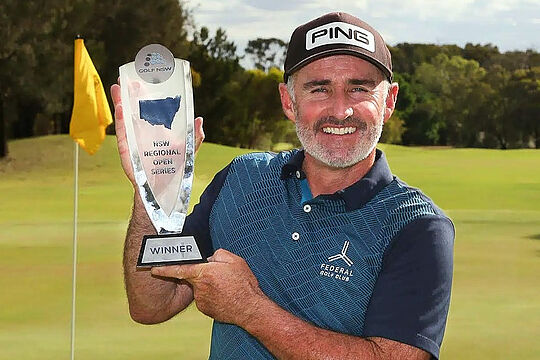 Following a string of missed cuts on the European Tour, Elvis Smylie will be buoyed by his form since returning to Australia.

The Queenslander, who finished runner-up at the NSW Open earlier this year, has notched up his fourth top-3 finish in his last five starts thanks to a superb final round 68 in challenging conditions.

The adidas Pro-Am Series now moves to Dubbo for the $50,000 Western Open.