2021 Masters champion Hideki Matsuyama has been honoured with the Prime Minister’s Award from Japanese PM Yoshihide Suga in Tokyo in recognition of him becoming the country’s first male major champion.

Matsuyama, 29, brought a golf mad nation to a standstill earlier last month in becoming the first Japanese male to win the Masters and the first to win any Major. 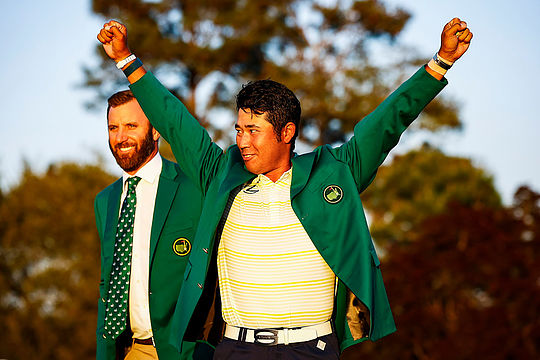 The continuing COVID-19 restrictions meant both Matsuyama and Prime Minister Suga had to wear masks at the presentation ceremony where six-time PGA Tour winner spoke of the agony people continue to endure in fighting the pandemic.

“Due to the influence of the coronavirus, both worldwide and across Japan, we are all living different lives, but even in these times, if this win can provide a sliver of hope to people, and inspire more kids, or even just one kid to want to try and play golf in the future, that makes me extremely happy,” said Matsuyama, who becomes the 34th individual recipient of the prestigious award.

Prime Minister Suga was quick to praise Matsuyama for securing an historic victory that would help to lift the spirits of the whole country just 10 years after the deadly earthquake and tsunami that wreaked havoc on the east coast of Japan including Matsuyama’s adopted hometown of Sendai.

“First and foremost, congratulations on your great achievement of winning the Masters,” said Suga.

“With this year marking the 10th anniversary (of the Great East Japan Earthquake), through your tremendous accomplishment of winning the Masters, you have given great courage and hope not only to those that were directly affected, but to the rest of your fellow countrymen and women as well, and I express to you our sincerest thanks and gratitude.”

Matsuyama’s name has been suggested to light the Olympic Games cauldron but for now his mind is firmly on winning a gold medal at Kasumigaseki Country Club, where he claimed the first of his two Asia Pacific Amateur Championship titles in 2010 by five strokes over Australia’s Tarquin MacManus.

It was that victory that got him a place at the 2011 Masters where he won the Low Amateur title a decade before securing Japan’s first ever Masters win.

It would be quite the fairytale if he could return to Kasumigaseki Country Club and also secure gold 11 years later.