Punter tries to call out Poulter but gets roasted

It doesn’t seem to matter what you do in our great game…there is always someone waiting in the wings to ‘dob’ you in for it.

And poor old Ian Poulter would have been in trouble had he done something illegal, as far as the rules of golf are concerned. 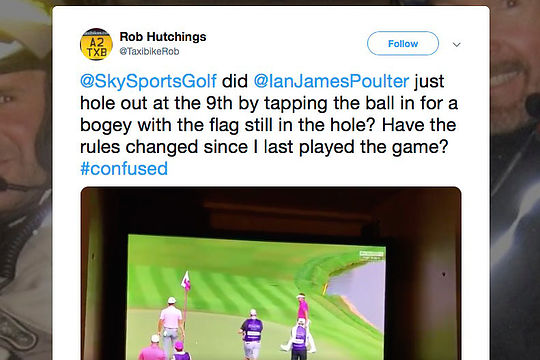 After watching Bryson DeChambeau do it and listening to Adam Scott tell everyone if he had a putt to win another Green Jacket, the flag would be staying in then along comes someone who obviously didn’t have any knowledge of the new rules.

Some poor uninformed golf fan named Rob Hutchings watched Poulter putt out for bogey on a hole at the Dubai Desert Classic with the flag still in – and was horrified.

Hutchings quickly took to Twitter and posted this comment: Did Ian Poulter just hole out at the ninth by tapping the ball in for a bogey with the flag still in the hole?

“Have the rules changed since I last played the game?”

He was quickly set straight on that one: Err, yes, they actually have changed the rule – and it came into practise almost a month ago.

Hutchings quickly had to eat some humble pie and despite looking to dob in Poulter for doing what he thought was the wrong thing, admitted he had no idea.

“I know; Where have I been?,” Hutchings Tweeted.

“How long has that been in play?

“I heard Ewen Murray talk about finding it hard to get used to it just after [Haotong] Li did the same.”

And still the comments kept coming, admonishing Hutchings for his mistake.

“All right, all right,” he wrote. “I stopped playing golf 10 years ago when I got a prolapsed disc, this was a WTF moment, first time I’d seen it.”

And the R&A have been doing their best to get the knowledge of the new rules out there for all to see.

But you can always guarantee someone missed all the publicity…and the notes outside their pro shop doors.