Pymble Golf Club have broken a 14 year representative drought after taking out the final of the 2016 Eric Apperly Shield with a 5&1 victory over The Australian at Liverpool Golf Club on Sunday.

The final had been built up as a battle of two surviving clubs with both teams having overcome tight semi-final matches with The Australian needing extra playoff holes to pip St Michael’s and with Pymble going to the wire against ACT Monaro. 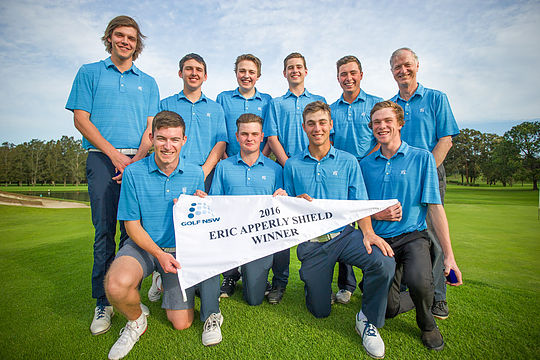 Representative commitments and clashes in tournament events saw The Australian losing two of its stars for the final. Blake Windred had committed to playing in the Mandurah Amateur and Kevin Yuan was playing on the PGA Tour China Series.

Yuan and Windred had played all season in the top-order and their absence meant The Australian was left with fielding a team of just four, as opposed to a full strength team of 6.

For Pymble, Harry Waddington and Joe Darcy had their matches forfeited, automatically giving Pymble a two-game advantage before the final even started.

With two matches to their credit Pymble needed only to secure two wins to win the prized pennant.

Pymble’s middle order of James Conran and Reid Brown wasted no time with solid victories secured early to close out the final. Conrad accounting for Dylan Convoy, 6&5, and Brown disposing of Lachlan Robinson 5&4.

With the result secured the remaining matches between Thomas Heaton and Corey Jones and Issac Noh and Joseph Trinder were stopped with the Officials declaring the matches ‘halved’.

Pymble began the quest for this flag with a perfect five from five win record in the round robin stage. They then accounted for last year’s finalist Monash in the quarter final, 4&2, before overcoming the ACT/Monaro.

Pymble last won the Eric Apperly in 2002 and before that you need to go as far back as 1968 to record their previous victory.

The win was particularly special for Bruce Robinson, Pymble’s team manager. Robinson was part of the club’s Apperly Shield winning side in 1968, and was clearly taken with the victory.

“There’s a terrific team spirit amongst them and they have all pulled each other along,” said Robinson. “They’ve been determined all year. It’s been fabulous to watch and this win is hopefully a sign of things to come for the Club.”

Over the last few seasons, Pymble is a club that has featured well, both in Eric Apperly and in Major Pennants, yet was searching for their breakthrough victory.

That came on Sunday and the win was very sweet for a club that has waited so long to get their hands on a Pennant flag. You also sense that this will not be the last Pennant flag the club will be flying proudly on their Club house flag pole in the years to come.