QBE host Norman makes dash to Bush and back

Not even the anniversary of the tournament that he started could hold back The Great White Shark.

Greg Norman headed for the funeral of the late President H. W. Bush late last week before he gave any thought of playing golf in the Thursday pro-am of the event he has now hosted for 30 years -the QBE Shootout. 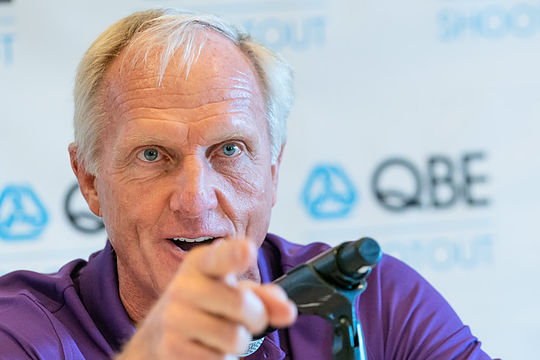 “It was the right thing to go,” said Norman after returning late Wednesday before teeing it up in the Thursday morning pro-am at the QBE Shootout at Tiburón Golf Club at the Ritz-Carlton Golf Resort in Naples, Florida.

“I had a lot of fun times with the President in the past.”

“He’s a guy that — I don’t mind saying this, he was the one who taught me never to judge anybody.”

Norman described the President’s funeral as a fantastic service: “I think everybody who was there really were moved about the service, the speeches that were made,” he said.

The former world No 1 recalled that he had once hesitated when offered a game with the then President of the United States Bill Clinton at NSW Golf Club in Australia.

The Shark telephoned President Bush for some advice.

Bush told him pointedly to play and to respect the office of the President of the United States.

“From that moment on I promised myself I would never pre-judge anybody again, because when I did play with President Clinton in Australia, we hit it off and we’re friends today,” said Norman.

“Forgetting what political position and political views you have, he’s a human being — he’s a great human being. He’s a good person to be around.”

Norman then moved on to talk of the role his event now played on the world’s richest golf tour since it began in 1989 in California.

“It’s really developed a life of its own,” he said.

“The rookies are now saying ‘Hey, tell us about the Shootout. It looks like a fun thing to play in.’”