Much of the focus in the early rounds of the Australian Open has been on the big international names of the tournament – Rose and Watson, the household names of Australian golf: Scott, Chalmers, Ogilvy. And of course the leaders, Senden, then Fraser.

But buried in the leaderboard are the stories of the hard working professionals looking for a break, the pre-qualifiers, and the young guns of Australian golfing, the rookies and elite amateurs building their careers. 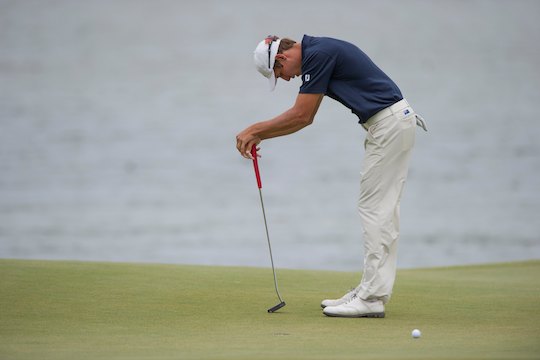 Oliver Goss reacts to missing his putt on the 11th at The Lakes during the second round of the Australian Open (Photo: Anthony Powter)

For these players, the story of the Open at the halfway point is mixed.

There were eight places available for qualifiers. Only two made it through to the weekend both at even par: Matthew Ballard 35 and Tim Wood who last week at the NSW PGA finished tied 18th at five under.

Matt Ballard, whose only previous appearance at the Open was in 2005 at Moonah Links, shot a stunning 8 under par at New Brighton to qualify this year and recently finished in the top 30 at the BMW New Zealand Open.

The amateurs have struggled.

Oliver Goss shot into focus after winning the WA Open and taking second place at the Asian Amateur Championship. He missed the cut at +6.

Chinese prodigy, 14-year-old Tianlang Guan, outstanding winner of the Asian Amateur Championship, played a round to forget at +10 on Thursday. 2 under was not enough to salvage his tournament, with a final score of +8.

It was Cameron Smith who made the cut at +2, the only amateur to move into the weekend. Smith was the leading performer for Australia in the World Amateur Teams event in Turkey in October and he made the cut in the Masters at Kingston Heath.

The youngest player at the weekend, Smith starts round three tied with the oldest player, Tom Watson, and the defending champion Greg Chalmers.

There were three rookie professionals in the field, graduates of Golf Australia’s National Squad.

Matt Stieger, who gained his entry by winning the NSW PGA last week, was the best performer at even and tied 28th.

Jake Higginbottom, who was the first amateur in 56 years to take out the BMW New Zealand Open, also passed through to the weekend on +3.

Dan Nisbet, leading Australian amateur in 2012, missed the cut by one stroke in his second professional tournament, after a second placing at the NSW PGA last week. An 11th hour invitation saw him in the starting line-up.

The weekend is the next test for these motivated players. They will be hoping to make their mark.