It was a day of intrigue at The Australian Golf Club as the quarter-finalists were determined for the 2015 Australian Amateur Men’s and Women’s Championship.

Lucas Herbert, our highest ranked world amateur was knocked out in the morning second round by Japan’s Naoyuki Karaoka, 2&1, before Kiwi Jason Gulasekharam disposed of Karaoka, 2&1. 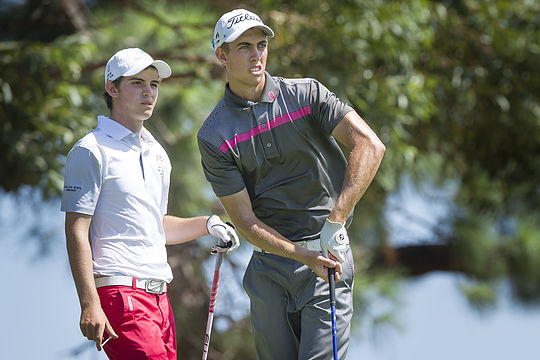 Justin Warren (R) from The Australian Golf Club accounted for Ryan Ruffels (L) during the third round of the 2015 Australian Amateur (Credit: Anthony Powter)

Young gun Kevin Yuan accounted for Thomas Power-Horan in the second round 1-up before disposing of Blake Collyer, 7&6, to set up a quarter-final with Canada’s Corey Conners after Conners accounted for the defending champion, New Zealand’s Tae Koh, 2-up.

Cameron Davis is also through to the quarter-finals after solid wins over Taylor MacDonald, 1-up, in the morning’s second round and Queensland’s Jake McLeod, 2&1.

Davis will play Jack Sullivan after Sullivan downed Ben Eccles in their third round match, 2-up.

Davis is positioned well in the bottom half of the draw away from Conners, with the Canadian the danger man in this championship following his victory last week at Lake Macquarie and his strong performances in the US, where he was a finalist at the US Amateur back in August in Atlanta.

Yet the standout match of the day, and there were a number, was the third round encounter between local member at The Australian, Justin Warren, and Ryan Ruffels.

Ruffles was playing his usual smart golf, nailing fairways and greens and keeping the pressure on his opponent Warren, who to his credit did not buckle and played his own style of aggressive golf.

Warren, who played well during the NSW Open back in November at Stonecutters leading after the opening day and last week at the Lake Macquarie Amateur, played brilliant golf. This was on display with an exquisite 120 metre fairway bunker shot on the 17th after being all-square with Ruffels.

The gutsy ‘career’ shot paid dividends as Warren stiffed it to four feet to win the hole and be 1-up with one the play. His bunker shot arguably one of the defining moments of the match.

A solid par by Warren on the difficult 18th at The Australian, which requires players to thread a near perfect drive through fairways bunkers that guard the left side and the preferred approach to a tempting green well guarded on the right by water, was enough to exit the much-touted Ruffels from the tournament.

With Ruffels and Herbert packing their bags, this tournament is now for the taking.

Warren will met Brayden Peterson after Peterson won his third round match against Ryan Chisnall, 1-up. The other quarter-final sees Jason Gulasekharm from New Zealand play fellow Kiwi, Tyler Hodge.