In tough and challenging conditions at The Grand Golf Club in Adelaide, where temperatures topped 43 degrees at one stage in the late afternoon, the final eight have been determined for the Australian Men’s Amateur Championship.

Local favourite and member of The Grange, Anthony Murdaca is through after solid victories over Thomas Power-Horan, 3&1, in the second round and a third round account of Joshua Kalms, 1-up, to set up a quarter-final appearance with Cameron Davis. 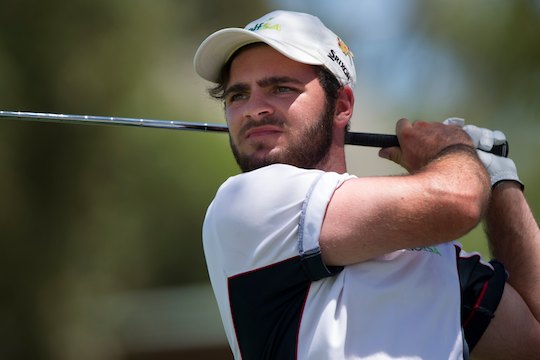 Anthony Murdaca in action at The Grange during the third round of the Australian Amateur Championship (Credit: Anthony Powter)

Earlier, Davis secured a stellar 2&1 victory over the highest ranked world amateur remaining in the field, Taylor MacDonald, with a 2&1 win.

Davis played superb golf in accounting for the ever dangerous MacDonald, keeping the pressure on with precision tee shot placement and wonderful putting on this impressive Greg Norman designed layout.

The other half of the bottom draw sees American Max Buckley against New Zealand’s Tae Koh, after Buckley accounted for Grant Booth on the 22nd hole.

After disposing of top-seed, England’s Ryan Evans, in yesterday’s first round, Ryan Ruffels looked to be on track with a solid second round 4&2 win over Blake Windred, but it would all prove to be in vein.

Despite demonstrating his exquisite shot making capabilities in his morning encounter against Windred, Ruffles struggled in his afternoon match, never getting into the right position and taking the opportunities when they arose.

Ruffel’s championship was cut short in the 3rd round by the Victorian Junior champion, Zach Murray, with a 3&2 loss. Full credit to Murray, who now has won the last two match play encounters against the much touted Ruffels.

Murray is set to meet the in-form Todd Sinnott in the top-half of tomorrow’s quarter-finals after Sinnott, runner-up last week at the Australian Master of the Amateurs at Royal Melbourne, accounted for Jordan Zunic, 1-up.

The other top-half quarter-final sees American David Snyder against Curtis Luck from Western Australia, after Luck disposed Geoff Drakeford on the 18th.