Quayle’s 2020 gets even better with North Coast win

Anthony Quayle fired a final round 3-under 67 on Friday to claim the North Coast Open by four shots at Coffs Harbour Golf Club.

European Tour player Deyen Lawson finished in outright second place at 6-under, while Marcus Fraser and Matthew Millar shared third place a further shot back at 5-under. 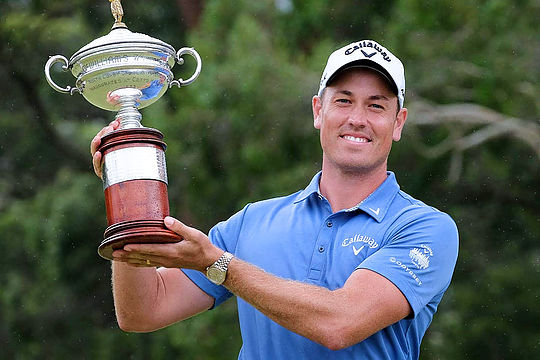 After starting the final round at Coffs Harbour with a share of the lead alongside Lawson an early set back with a double bogey on the third meant Quayle needed to dig deep to reclaim lost ground and he did exactly that.

Another birdie on the 17th provided a sufficient buffer heading up the last to secure the victory.

“I felt really good going into today and into this event to be honest,” said Quayle after the win.

“I played pretty nice really. I made a double on our third, and I didn’t hole a lot of putts early, but got hot midway through the round, and started to hole a lot. Apart from the double I think I played pretty flawless golf.”

The Regional Open series by Golf NSW was to see The Tweed Coast Open next on the schedule, however, tournament organisers were forced to cancel the event after torrential rain and gale-force winds over the last 48 hours rendered the course unplayable.

Officials inspected the course yesterday, and with bunkers out of play, tree limbs down, and several holes at risk of inundation during high tides expected over the next days, officials were faced with no option but to call the event off.

Golf NSW has indicated a decision regarding rescheduled dates will be made in the near future.

The six-tournament $300,000 series sees the Murray Region Open kicking off 2021 starting on February 15th at the Corowa Golf Club. Players will face a short turn around for the next event with the Dubbo Open scheduled for February 19th at Dubbo Golf Club in the State’s central west.

The following week the Queanbeyan Open will take place at Queanbeyan Golf Club, from 23rd February. The South Coast Open is the final of the series, with the Pro-Am and 36-hole tournament getting underway on 27th February.

With a $50,000 purse on offer at each (professionals only), and the top three finishes (professional or amateur) at each tournament securing a start in the 2021 NSW Open this series provide a much-needed format to get golf back on course.

The NSW Open will be held at the Concord Golf Club beginning March 25th.